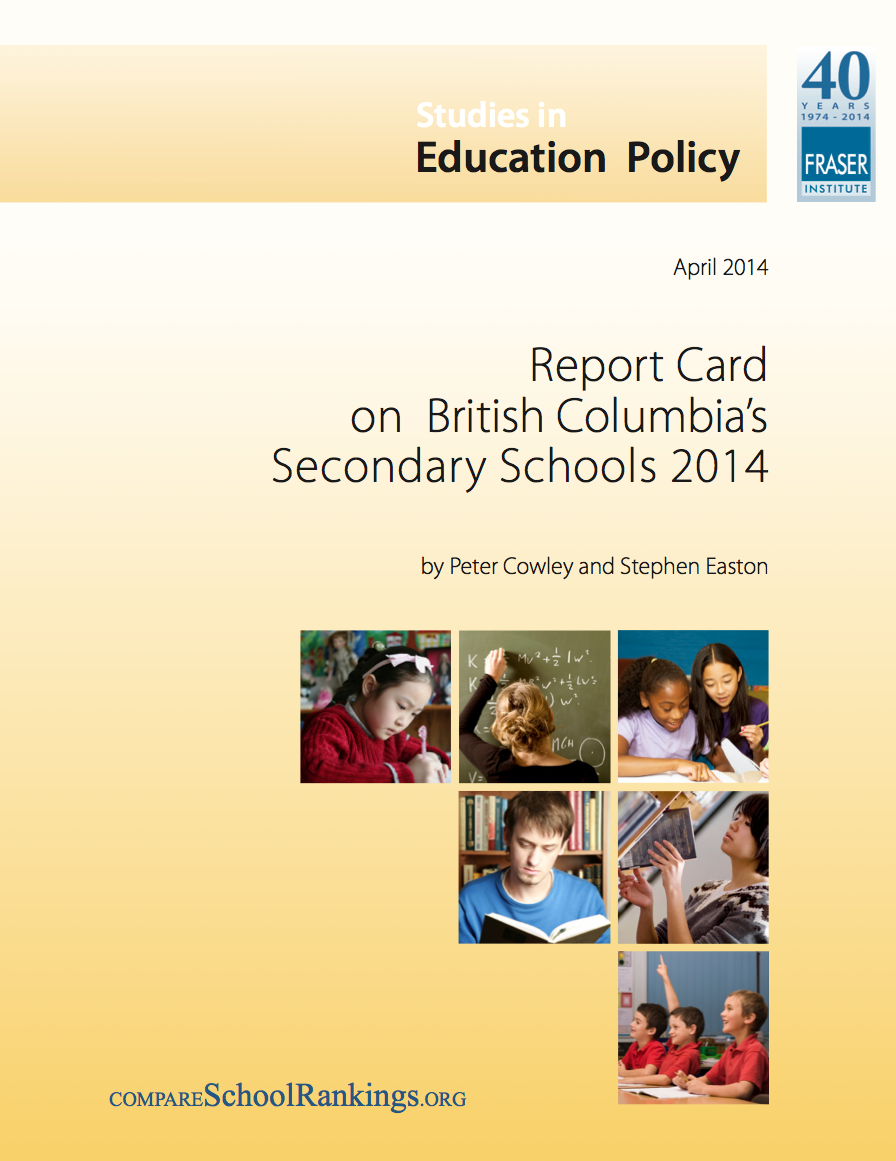 As they receive some new reading material regarding the nature of achievement of their schools, as  compared to levels found across the province.

The Fraser Institute Report Card on British Columbia's Secondary Schools is a document which some accept as a useful data review, while others can at times be dismissive of the work. Suggesting that the tables don't properly reflect the reality of education in the public system these days.

For those schools that trend towards lower results, the report for the most part can find School District Administrators, Board members and teachers on the same page of the argument, (something of late not easily done) as they outline their concerns over the ranking aspects that the report provides for.

The report reviews 293 public and private schools across the province. With the nature of the survey and the methodology that the Fraser Institute employs frequently making for much in discussion regarding their results.

Issues that the authors Peter Cowley and Stephen Easton offer up some thoughts about, found on pages 3 through 11 in the prologue to the actual data review.

Still, for parents, the Reports do provide one of the few yardsticks which they can review, in order to get an idea as to how schools in their community are measuring up with other parts of the province.

Interest in that measuring stick seems to be in demand, as over the last five years the Fraser Institute has increased the number of schools reviewed, offering a snapshot of both urban and rural school results.

Their report this year features thirty one more schools now listed, compared to the same report of 2009.

As for the results of the Northwest for the 2014 version,  eight schools from Smithers to Haida Gwaii make up report, with a wide range of results for the region.

In Prince Rupert, Charles Hays Secondary continues to hold pretty close to last years observations, slipping a little in the ranking system (controversial as it is) that the Fraser Institute has in place.

For the Prince Rupert school, 2014 finds Charles Hays dropping from their placement of a year ago, with Charles Hays listed at 3.7 out of 10, down from last year's mark of 4.1 out of 10.

Overall that places Charles Hays at 266 out of the 293 schools surveyed.

By Comparison, last year Charles Hays was listed at 258th out of 284 schools.

When it comes to the Academic Performance report, Charles Hays had better average exam marks in this report listed at 63.6 compared to last years 60.7.

With the exam failure mark in decline as well, listed at 18.3 for this years findings.

The Graduation rate for Charles Hays is 94 percent, down slightly from last year.

While the delayed advancement rate is 39.9 percent, up 2.4 per cent from one year ago.

The snapshot for Charles Hays can be found below: 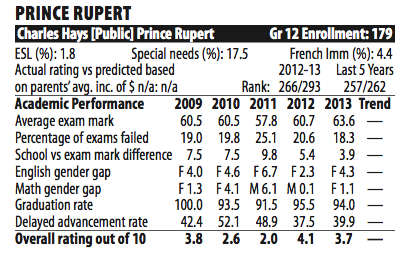 Other schools of the Northwest included in the report can be found below.

In the BulkleyValley, three schools are listed as well, with the Bulkley Valley Christian school included for the first time in the review, and with that claiming the highest ranking of all the schools of the Northwest.

On Haida Gwaii Queen Charlotte Secondary, with the lowest of class sizes of the region fared rather well, closing in on a top 50 position from the reports findings.

You can review the full report here, with the findings for each School District of the Northwest found on the pages listed below.

The Secondary Report is the second half of the Fraser Institutes two part review of education. The opening review that of the elementary schools was report delivered last month, we outlined those findings with this item from the blog of March 10th.

For more on Education issues of the region see our Archive page.

As the next few days go by, check back to this item on the blog, as we will outline some of the media review on the provincial feedback from the results below.

April 8-- Fraser Institute high school rankings: Private schools York and Crofton continue to lead the pack with perfect scores
Posted by . at 9:54 AM