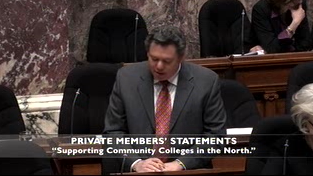 Regular readers of our Legislature pages will have noted that in recent weeks we have made frequent  mention of Skeena MLA Robin Austin's efforts in Victoria. A very busy period of time for the neighbouring MLA, who since the Legislature resumed sitting in February has made a number of inquiries of Government ministers regarding the impact of LNG development in the Northwest .

In particular, and of note for all ridings of the Northwest has been his focus on what preparations the provincial government have in mind to assist the region with the prospect of growth on a very fast pace.  (see here)

Last week Mr. Austin once again explored the theme of the scale of developments planned for the Northwest, wondering what preparations the Government have made to assist communities and the residents of the region to take advantage of those opportunities to come.

Both in accessing the jobs that will be available and in assisting in the municipalities of the region with the growing issues that they face.

Thanks to the member for West Vancouver–Sea to Sky for his comments and for bringing forward this motion this morning. He mentioned, of course, a potential new LNG plant in his riding. I think it's fair to say, as the MLA for Skeena, that I think I'm the person in this Legislature who has witnessed the greatest benefit so far from any potential LNG developments because, of course, this started in Kitimat probably about six years ago now. In fact, the largest project, which has spent the most capital, sits in the district of Kitimat — that, of course, being the Chevron-Apache project.

It is truly inspiring to see what has been done and the amount of dollars that has been spent just in preparing the site. They've essentially moved a side of a mountain in order to create the terrain that's required for a site, and some people say that they've spent between $800 million and $1 billion just in pre-preparation.

When you talk about LNG, hon. Speaker, the numbers are quite staggering to think of. Companies come in and can invest up to $3 billion, I'm told, and then might even walk away and not make a final investment decision. The numbers are staggering, and it's made a lot of people quite successful in terms of the jobs that are being created....

We also need to understand that while these companies are spending millions and millions of their shareholders' dollars, the government also has a responsibility to look into some of the infrastructure needs in the region. I brought this up before, and I'll say it again.

That bridge is falling apart. When the mayor and the council say that we need some help to fix this, the government says: "Well, we don't have any dollars coming in yet. We need to have a final investment decision. We need to see actual revenues coming in." That's way too late to be making these kinds of infrastructure needs. There are things that need to be done to take advantage of this.

Mr. Austin clearly understands his role in Victoria, having raised an important issue such as infrastructure and keeping it as a high profile issue in the Legislature.

The full account of his presentation can be found from last Monday's (March 24) Legislature record, Mr. Austin outlines the infrastructure concerns at the 10:50 mark of the discussion.

The Video presentation is available from the House Video Archive for March 24, view it at the 53 minute mark of the video player.

The Skeena MLA was back on point last week and again today, seeking to get a more firm commitment from the government on the need for improved training in the Northwest.  Of particular concern to him were training opportunities for the region.

On that theme he provided a short history of the NDP's concerns when it comes to post secondary education in the region and the need to provide proper funding for Northwest Community college.

I rise this morning to speak about Northwest Community College and skills training in the northwest. The bedrock of building any new industry in British Columbia is a skilled workforce. Unfortunately, Northwest Community College, which should be the epicentre of training for all the projects proposed and underway in the northwest part of the province, has been woefully under-resourced for a number of years now....

Things have not gone well since the start of the government's mandate, when the government left a hole in the ground in Prince Rupert for a number of years, rather than keep the promise made by the outgoing government to build a Northwest Community College campus in that community.

My former colleague from the north coast used to tell stories about how they would drag a sign saying Gordon Campbell College out to the hole in the ground and hold protests over this symbolic gesture of a new building rather than fulfil the commitment to build a new campus.

Years of opportunities were lost because of the time that this government stalled before building that campus. Of course, then, after the campus was built, this government never provided the college with sufficient operating funding to make the best of it. That's where we are today, with colleges and universities being asked to slash $40 million from their operating budgets, choking innovation and driving up tuition fees.

The full account of Monday's talking points can be found from the Legislature record here, his commentary is recorded at the 1020 mark.

Mr. Austin's review starts at the 20 minute mark on the video player and can be viewed from the Legislature Video Archive for the Monday morning session of March 31st.

When it comes to asking questions on major concerns of the northwest in recent weeks, it's Mr. Austin who appears to have taken up the bulk of the talking points for the Northwest in the Legislature.

The North Coast's MLA Jennifer Rice hasn't been particularly active during the public roles of Legislature sessions in recent weeks. In fact, for these first few months of the new session, she hasn't raised the profile of the riding very much since the Legislature returned in February.

It appears that when it comes to discussion on development in the Northwest, the topic has for the most part been left to Mr. Austin to carry the bulk of the debate.  Mainly as would be expected with a Terrace or Kitimat slant, though as we have seen from time to time offering an occasional mention of developments on the North Coast.

We have more on Legislature developments in Victoria available on our Archive page.

Email ThisBlogThis!Share to TwitterShare to FacebookShare to Pinterest
Labels: April 2014, Skeena MLA Robin Austin on Northwest issues for the Legislature