Re:Design Rupert to get preview this Thursday 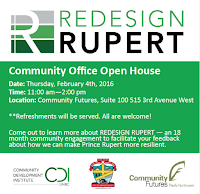 The first opportunity for residents of Prince Rupert to learn more about the City's Re:Design Rupert project comes up this Thursday.

As the City, along with Community Futures of the Pacific Northwest and UNBC's Community Development Institute hosts a Community Office Open House to debut the concept.

The event takes place from 11 until 2 PM at the Community Futures Office at 515 - 3rd Avenue West.

Re:Design Rupert follows in the footsteps of some of the other projects announced by Council in recent months, such as Re:Build Rupert and echoes themes of his election campaign and the call for residents of the city to Re:Think Rupert.

The announcement of the project also comes shortly after the City's participation in a recent conference related to urban design called Placemaking, an event which the Mayor hailed as a success at the January 12th Council session.

Mayor Brain offered up a short synopsis of the what Thursday's will provide for through his Facebook page, while the invitation to the Thursday event was also sent  out through the City's twitter Feed.

Re: Design Rupert is described as an 18 month community engagement project, that will seek the input of the community on how residents believe the community can become more resilient.

Thursday provides the first opportunity to meet the team and get a sample to what they have in mind for the next year and a half.

Key to the partnership will be the participation of the Community Development Institute from the Prince George campus of UNBC.  You can learn more about their past efforts in other communities and what the mission of the Institute is from their website here.

The planning for Re:Design Rupert was first outlined by the Mayor back in August of last year, you can review the background to the initiative here.

At that time, Mayor Brain noted that the cost to the initiative was budgeted at around the 150,000 dollar mark, with funding to be allocated through the city's funding for Major Projects. With Re:Design Rupert to feature a full time professional facilitator, as well as support staff and research people.

The Mayor also noted in August that the project would be the largest public engagement process that the community has ever seen.

While the project launches on Thursday, City Council has yet to provide a public presentation during the course of the regular public council sessions to outline the full scope of the program, or the final anticipated costs related to it and what the goals of it may be.

Introducing the concept to Council would also allow for Council members to join the discussion and provide them the opportunity to offer up their thoughts on the project and the expectations that they might anticipate from the eighteen month program.

You can find more on items related to City Council discussions from our archive page here.
Posted by . at 8:44 AM

Email ThisBlogThis!Share to TwitterShare to FacebookShare to Pinterest
Labels: Re:Deisgn Rupert to get preview on Thursday