An agreement almost twenty years in development was signed on Monday, creating what is described as eco-system based management in the Great Bear Rainforest, an area which will cover 6.4 million hectares from the Central and North Coast.

Home to 26 separate First Nations, the new Great Bear Rainforest land-use order, will achieve its goal of ecological integrity by protecting 70 per cent of the old growth forest in the management areas, up from the current level of 50 percent.

From these new measures, 85 per cent of the forest will now be protected, with 15 per cent to remain available for logging along the coast.  A number of protocols have also been signed with a number of First Nations to address their concerns on cultural heritage resources, freshwater ecosystems and wildlife habitat.

As part of the agreement, the commercial grizzly bear hunt will  come to an end in Coastal First Nations' traditional territories.

The Great Bear Rainforest process began with the first land and resources management planning meetings in 1997, starting what became nineteen years of conversation, public comment and land use legislation.

With the agreement in place now, the Provincial Government has announced plans to introduce supporting legislation to the agreement, a process which should be introduced in the Legislature later this spring.

The managed forest component of the Great Bear Rainforest will consist of 1.36 million acres, where the harvesting of old growth and second growth forest will using an ecosystem based management plan. 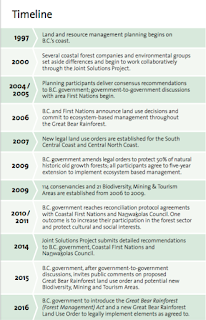 Other land use in the Great Bear Rainforest will see the following designations:

While 675,000 acres will be set aside as Special Forest Management Areas, where hydroelectric generation, mining and tourism development will be allowed as long as it maintains ecological integrity.

More background on the land use aspects of the Agreement can be found here.

Both North Coast MLA Jennifer Rice and MP Nathan Cullen celebrated the signing of the Monday's Final Agreement to protect the Great Bear Rainforest, taking to their social media pages to share their thoughts.

More background and reaction to the Great Bear Rainforest agreement can be found below: