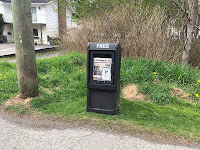 There was a lot of heat generated by Sunday afternoon/evening's giant blaze on the Prince Rupert Waterfront, but the heat that was felt by the crowd above the CN Roundhouse, was nowhere near as hot as that which made its way to Fraser Street four blocks to the south.

That after the local weekly felt the heat of some outraged readers after their first two drafts featured some speculation on the cause of the fire, observations that certainly captured the eye of readers.

The main thrust of the paper's coverage which started shortly after 7PM,  focused on the actual fire, but it was their one line of speculation that the fire may have been related to the recent protests in the Wet'suwet'en area of Northern BC that has come to dominate the theme of their coverage.

That observation brought out a strong complement of community members and before the paper closed their website comments off and scrubbed their Facebook posts the comments had made it well over the 50 contributions mark.

The view of the readership one that was pretty universal that the Prince Rupert paper had dropped the ball when it came to factual journalism on the waterfront fire story.

The tone of their work did seem somewhat surprising, with the paper working through a second draft of the story that noted, or maybe in their mind clarified things, suggesting that they were seemingly accounting for speculation heard among the crowd.

By the time the third draft came out sometimes towards 11 PM, the story simply stated that the cause was unknown. 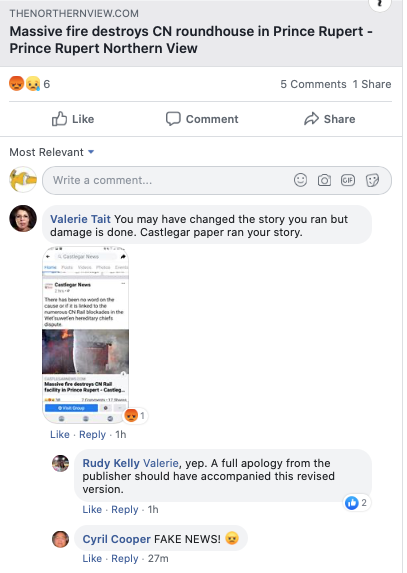 That narrative changed by morning with the RCMP making an arrest in what is now being called an arson, the Mounties noting however that the incident is not believed to be related to recent protests at CN sites across the country.

However, the genie so to speak was already out of the bottle by the time the weekly got to their final draft, with respondents to the revised Facebook post still making note of the original themes and original but now banished post, calling the paper out on it.

Even more worrisome however, is how the original story, replicated on Black Press websites across the province,  has now generated a flood of social media observations and attention on Prince Rupert.

A collection of unhinged thoughts from contributors, who after reading the story from their local paper have made #PrinceRupert trend in with their own conspiracy theories.

From those early notes to the final draft, rather than covering news, the paper became the news; with their work to change the story, now fuelling a firestorm of its own and becoming the dominant takeaway from the story.

For more notes related to media on the North Coast see our archive page here.
Posted by . at 9:21 AM