The city's Independent School found itself in a familiar place once again this year, with Annunciation claiming the top spot in the Prince Rupert area from the annual Fraser Institute elementary school rankings.

The findings from the Fraser Institute Elementary School Report for 2016 were released yesterday, with the Vancouver based organization reviewing the results of 944 elementary schools to determine this years listings.

That total of the number of schools that make up the foundation of the report is down from the 978 schools that were reviewed last year.

The Fraser Institutes's review of elementary schools makes use of the  results of Standardized testing held across the province, commonly known as the Foundation Skills Assessment, as part of the statistical model to reach its conclusions.

The main focus of the annual reports is found from the academic indicators of Grade 4 Writing, Numeracy and Reading, with trends and class composition also part of the notes from the findings.

As they have in recent years, the Fraser Institute is looking for feedback on its report, with comments on their findings to be directed to Peter Cowley one of the authors of the report at peter.cowley@fraserinstitute.org.

As for the review of the Northwest, the breakdown for each school can be found below, not included in the review are results for Port Edward or Lax Kw'alaams.

Annunciation was at the top of the local listings with a 7.9 out of ten rating, putting it at 120th spot across British Columbia of the 944 elementary schools reviewed by the Fraser Institute. 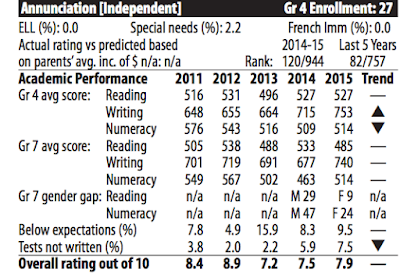 The results for this year, while providing a bump from the 2014 number, still are down from the high number days for the Prince Rupert Independent School, which at one point found Annunciation ranked as high as 58/853 of 2013.

While Annunciation did not crack the top 100 for this year's review, three other Independent schools in the Northwest did.

Of the four public elementary schools in Prince Rupert, Lax Kxeen was ranked the highest in the city, with a 4.6 out of 10 rating, 759th of 944 in the provincial survey.

The results for the East side school from this survey indicate an increase from past results over the last 5 years of the reports, but a decline in overall placement in the listings.

In both the Annunciation and Public school results, some of the overall placement declines could be attributed to the increase in the number of schools that have been added to the survey process over that five year period. 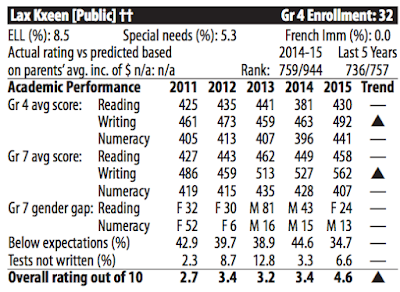 The three remaining public schools were given variations of a 3 out of 7 rating: 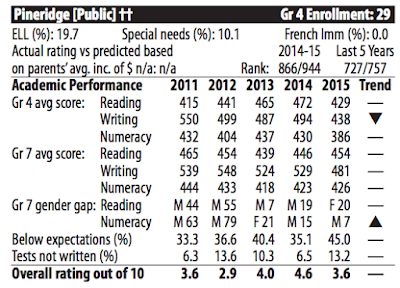 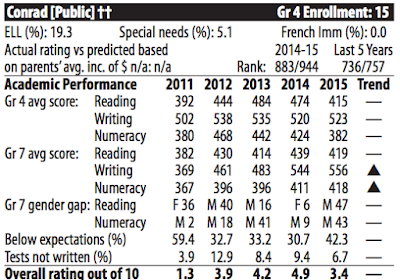 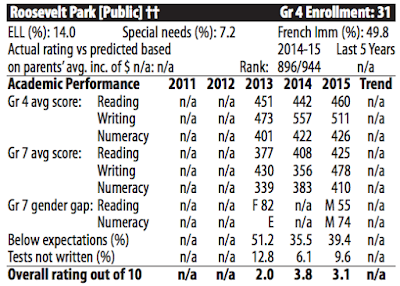 You can also make use of the interactive Search Engine for the report here.

In a media release on Sunday, the Fraser Institute noted what would seem to be its mission statement for each year, highlighting its focus for this years compilation.

“Our report card is the only objective, reliable tool that parents have to compare the academic performance of their child’s school over time and to that of other schools in their community,” -- Peter Cowley, Fraser Institute director of school performance studies.

You can review their full statement on this year's report here.

For many, the annual review continues to generate controversy with School Districts, the BCTF and some parents all challenging the Fraser Institutes process of evaluation of the province's elementary schools.

The focus that the organization puts on rankings is something that rankles many, who suggest that the data collection misses the mark on a number of socio-economic issues that could impact on academic performance.

The Report comes out as School District's across the province are trying to reconcile their budget woes, with a number of them facing the need to make spending and employment cuts to reach a balanced budget.

Prince Rupert's School District 52 is facing a near two million dollar deficit and will be addressing their budget issues at the next School District meeting on April 12th.

On Sunday, the BCTF used its social media platform on twitter to outline it's thoughts on the Fraser Institutes work on education.

The release of the Fraser Institute report also made for some lively discussion on the #bced twitter feed through Sunday and into today.

Some of the media notes related to the Spring review can be found below:

For more items related to education in the Northwest see our archive page here.
Posted by . at 9:18 AM