The City of Prince Rupert has once again taken to the pages of the weekly newspaper to provide some background information on its Planning for Major projects, focusing on the prospect of LNG development in the region and what impacts it may deliver to the region.

The purpose of the one page information piece in the paper is to explain the ongoing work related to the City's Planning for Major Projects Initiative.

As part of the overview, the city while taking notice of current delays, notes that as of this month, there are Five Major LNG projects proposed for the Prince Rupert region. Also included in the list of major projects is one that is currently underway, that being the work of the Port and its expansion of container facilities at Fairview Terminal.

From that the planning for major projects, as the city explains it, is designed to take into account some of the other considerations that may come from accelerated growth, such areas as increases in population, impact on housing, infrastructure, services, our social fabric and more.

On the theme of population, the overview uses a chart which highlights the City's population estimate of last year of 13,766, while acknowledging that the provincial estimate still remains a lower based number of 11,918.

Using the City's projection, the high end of potential population surge by 2020 is indicated to be at close to 25,000 people, though the city doesn't note how many of the proposed development projects would have to go forward to reach levels that would more than double the city's population.

As for more modest indications of economic growth, the City advises that it has already seen some indication of change, with applications for rezoning and development permits increasing by 100 percent over the past three years.

Missing from that review however, is a table for comparison, something that would provide a numerical comparison of the numbers from previous years and the current shift upward in permits.

When it comes to the planning for the Major Projects, the information review provides a check list of sorts as to what the City has done in the last year to prepare for those potential projects.

Commissioned a report detailing the status of all City infrastructure and launched the Re:Build Rupert initiative

Hired the Community Development initiative under the Redesign Rupert banner

Also noted is the creation by the Mayor of a Council committee to develop interim policies and strategies. A project designed to help the City manage the way that growth plays out in the community. That initiative is to provide recommendations to Council for changes to City land use regulations.  Later in the process, the City plans to bring any new policy plans that are created to the community for feedback and renewal of the Official Community Plan.

The good news for the weekly paper is that April information piece appears to be the start of a recurring advertising plan, with the City looking to expand on its planning concepts in a future edition of the paper.

The City wraps up their presentation by making the case for the major planning process by noting that even if LNG does not take place, that the fact remains that the city will still need to upgrade its infrastructure and lay out a plan for the community to go forward.

From that, it makes mention of the other major report of the last year, the Hays 2.0 Vision statement and its goals to Redesign Rupert, noting that collecting good information and updating local plans puts us one step closer to realizing that vision.

Not included through the course of the full page of the overview however, is an indication of cost for the range of the different initiatives that have made up the planning for growth program to this point. 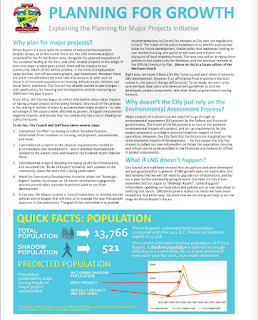 So far, the City has not posted an archive  copy of its update to its Planning for Major Projects page on the city Website, something that would provide a permanent archive of the information and allow residents to review and return to it for future reference.

For those that may have already sent their weekly paper off to the recycle bins, an online version of the ad is available on page 4 of the April 6th E edition of the Northern View.

A review of some of the other aspects of Council's work this year can be found in our Council Discussion archive.
Posted by . at 9:20 AM