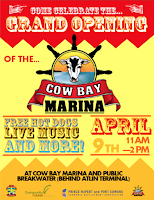 If the Environment Canada forecast holds true (always a 50/50 proposition), the Weather Gods will be smiling down upon the Cow Bay Marina Docks tomorrow, as the City of Prince Rupert celebrates the Grand opening of the new destination point on the city's waterfront.

In a media release from Thursday, the city outlined the work of a number of community partners to help bring the long desired access to the city's waterfront to the finish line.  Noting in particular, the financial contribution of Community Futures of the Pacific Northwest and the city funded Prince Rupert and Port Edward Economic Development Office as instrumental in bringing the project home.

"Community Futures Pacific Northwest, as one of the key partners in the project, is delighted to see the fruition of this long sought after community recreation and business opportunity. It is sure to be an economic driver and will hopefully spark the imaginations of local entrepreneurs,"  -- Community Futures Board Chair, Wendy Prystay with some thoughts on the Cow Bay Marina completion.

Preparations for the celebration have been in the works for a few weeks now, with the Marina dock and surrounding area already finding some use as a photo backdrop for any number of events and a quickly becoming a new fishing spot for some locals. The Grand Opening events on Saturday start at 11 AM and run until 2 PM with live music, hot dogs and additional activities to carry through the three hours of celebration.

The City's media advisory from Thursday offered up a bit of history related to the project, tracing back the key elements of the project and outlining the list of groups and organizations that have participated at one time or another into the process over the last four years. A long running marathon that Community Future's John Farrell has been part of during his time with the community development organization.

Congratulations of course are deserved for all of those involved in reaching the finish line of that marathon and delivering on the concept that at times seemed to be just out of reach, so the applause on Saturday will be well earned.

However, missing among the talking points from the city, or from any of the items from local media leading up to this Saturday's event has been any mention of the past work of former Mayor Jack Mussallem on the project.

A fair bit of the early ground work and facilitation for the development of the Cow Bay experience was put in place during his last term in office, a period of time where he continued to try and bring the project to the conclusion phase.

To the victor go the spoils as they say, so it will be Mayor Lee Brain who offer up the public comments at the opening.

But hopefully in among the stakeholders and other officials that will be in attendance and speaking at the event will be the former Mayor, who we imagine could be prompted to offer up a few words of his own if asked.

Or, should Mr. Mussallem be absent from the Dock on Saturday, at least someone might make mention of his work on the file over the years. A shout out to the former civic leader who first made mention of those itinerant yachts travelling just by our doors and the guy who put in motion the first steps of the project that now provides the place where they soon will be tying up.

Regular readers of the blog have followed along as we tracked the project, some of those entries can be found in our Waterfront Development Archive page.
Posted by . at 9:16 AM