They appear to have caught up on some of the avalanche of paperwork at the Canadian Environmental Assessment Agency when it comes to comments and observations on the Pacific NorthWest LNG project, and among the latest additions to the information data-base is the City of Prince Rupert's contribution to that environmental assessment process which is now available for review from the CEAA website.

As we noted in March, Mayor Lee Brain had mentioned in passing during the course of the March 21st City council session that the City had submitted its comments to the CEAA process.

Though as we observed at the time, a search of the CEAA data base would turn up no sign of the City's recently delivered correspondence.

That is now no longer the case, with the City of Prince Rupert overview recently added to the lengthy list of Pacific NorthWest LNG documentation to be found on the CEAA project page.

In their submission, the City of Prince Rupert declares that it is generally supportive of LNG development in our area, given the proponent meets environmental standards of both the CEAA and BCEAA processes and adequately addresses the socio-economic impacts of their project.

As part of its three page submission, the City notes that city staff has reviewed the Draft Environmental Report and have provided for a number of comments for consideration before any final decision on the Pacific NorthWest LNG project is made.

A portion of their observations shift the focus off of environmental issues and more towards the Socio-economic impact of the proposed development on infrastructure for the community.

The city calls attention to a 2014 report by KPMG that outlines the cost issues that such development may pose for the community.

As well the city makes note of the provincial tax cap issue on Major industry in the region and outlines some of the pressures that LNG development could bring towards affordable housing, increased shadow population and fire and emergency service provisions.

The City calls on the CEAA to include in any application approval a condition that the proponent work with the City to fully mitigate the cost of these infrastructure demands.

All of which while interesting background on the stresses that a community faces with the prospect of major development on the horizon, may not have much to offer as far as the scope of the Environmental Assessment process that the CEAA is tasked to direct its mandate focus towards.

The City does however offer up a few items of concern and suggestions for the CEAA assessment process when it comes the environment, items which the federal agency may find of some interest as it puts together its final document for the consideration of the Federal Government.

Concerns related to Acidification of local bodies of water were part of the city's notes, with the City is also calling for baseline measurements and a monitoring program be put in place for Woodworth and Shawatlans Lake and that the results of those activities be shared with the City.

On Air Quality emissions the City is requesting that a condition be placed on the proponent to monitor emissions from gas powered turbines on site and to use gas turbine technology that provides for reduced air emissions.

The Flora Bank area and its importance to local salmon populations is also part of the City's submission to the CEAA, with the City requesting that the CEAA include a minimum monitoring period to ensure that rare weather events that may contribute to erosion or deposition are also accounted for, with the requested period of monitoring to be no less than 10 years.

The City additionally wants to be added to the Monitoring protocols list which Pacific NorthWest LNG has a duty to consult, that list currently includes the Department of Fisheries and Oceans, Natural Resources Canada, the Prince Rupert Port Authority, Aboriginal groups and other relevant federal authorities.

The prospect of dredging and its impact on what is called Marine Country Foods (such as crabs, shellfish and such) was noted by the City, with monitoring by the proponent as part of the proposed development a key element of the City's submission. From the dredging and the monitoring that will be part of that process, the City has asked for precautions to be taken when it comes to the disposal of any material from the dredging operations and that the City be informed of monitoring results, in order to proactively notify residents in the case that a given species or region becomes unsafe for harvest.

For those interested in the full content of the city's comments to the CEAA, you can review the entire three page submission from the Office of the Mayor for the City of Prince Rupert below
(click on the images to enlarge): 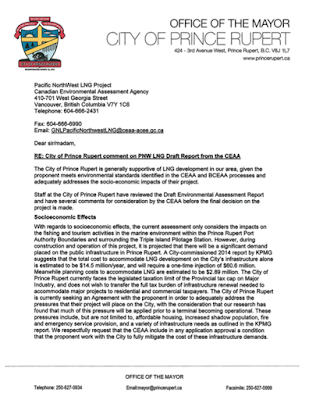 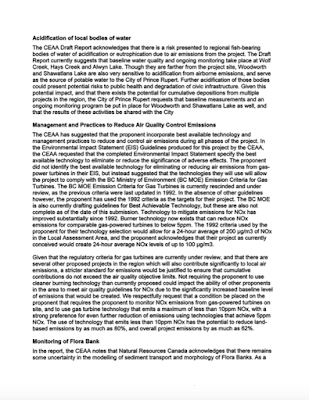 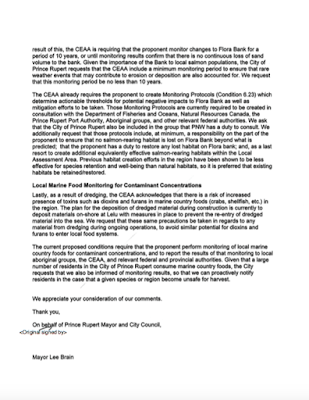 The link to the submission at the CEAA website can be found here.

Other contributions to the CEAA process from a number of other area municipalities and First Nations are listed below:

The City of Prince Rupert's approach to providing for public information and discussion on the proposed Lelu Island development is somewhat different than that of other communities of the region.

The City's correspondence doesn't quite offer the outright endorsement of the Pacific NorthWest LNG project that Port Edward appears to have provided, nor does it take note of the kind of opposition to the proposed development that Smithers delivers in their review for the CEAA.

Those two communities made their submissions a matter of public notice at open council sessions previous to delivering their correspondences.

In Smithers, the Town Council reviewed their draft letter in public session last month, with Council members offering up their thoughts on the issue at the Council session of March 8th prior to delivering their comments to the CEAA.

At that public council session, the Smithers Council outlined a range of its deep concern that it has related to the project and in a 6-1 vote noted their opposition to the choice of Lelu island as the site for the development.

At it's March 8th Council meeting, Port Edward Council members also outlined some of their thoughts when it came to the proposed development, though the correspondence has yet to be added to the data base at the CEAA, or provided as part of the notes on their Council session at the District website.

At that Port Edward Council session, all Council members and the Mayor offered their approval of the letter.

Those public commentary sessions are in contrast to the course of  public engagement that the City of Prince Rupert has taken of late.

To this point, Prince Rupert has still to provide a copy of its letter for review on the City website for review by city residents, and other than the short observations of March 21st, there were no public discussions held during Open Council sessions related to the Pacific NorthWest proposal prior to the letter being forwarded to the CEAA.

All of which leaves a situation where it is unknown to the city's residents what kind of discussions were held related to the city's position and whether the sentiments in the letter reflect the majority of Council members.

The CEAA will have a fair bit of time to review the concerns and recommendations from the City of Prince Rupert and the others who have taken time to make submissions when it comes to the proposed development at Lelu Island.

On March 19th, we outlined how the CEAA's assessment process has been extended by three months, with Pacific NorthWest LNG to provide further guidance to the regulatory body as to the issues that they have raised.

Once the ninety day pause is complete, it's anticipated that the Federal Cabinet will deliver its decision the fate of the much discussed LNG project.

You can learn more about the Pacific NorthWest LNG project from our archive page here.
Posted by . at 8:50 AM