The precipitation levels for the next few days on the North coast will be a little heavier than your gentle April Showers, with Environment Canada forecasting Rain at times heavy, through until Wednesday.

Those travelling to Terrace, Kitimat or further inland, will want to take note of the Heavy Rain Warning issued by Environment Canada on Monday.

For Prince Rupert and other coastal locations, much the same forecast is in place, though precipitation levels are somewhat lower for the coast.

Things are expected to clear for the region by Saturday, the forecast for Prince Rupert and other coastal areas in the region can be viewed below: 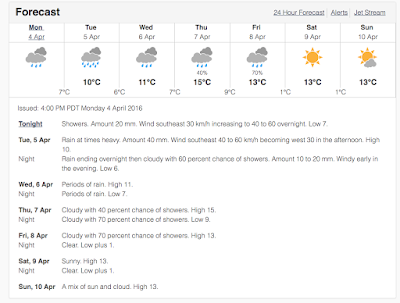 Haida Gwaii's forecast does not appear to provide for the higher rates of rainfall that the mainland will feel as the storm comes in.

Should updated information be provided by Environment Canada we will update this post as required.

For items of interest from past weather events see our archive page.

Email ThisBlogThis!Share to TwitterShare to FacebookShare to Pinterest
Labels: rain on the way for North Coast, Wind