Lester Centre to roll with Rock of Ages Thursday through Saturday

The audition process started back in October and after five months of cast selection, rehearsals and set construction, Rock of Ages is ready to take to the stage of the Lester Centre starting tomorrow night.

The popular musical comedy which is being presented through a special arrangement with Samuel French will bring together some of the North Coast's top actors and actresses and feature the musical skills of the city's popular Triple Bypass with guest Jeff Saunders.

The theatrical presentation will stay true to the theme of the eighties rock explosion and all of its excesses, Kitimat's Josh Marsh has the male lead as Stacee Jaxx, while Lauren Armstrong takes on the challenges of Sherrie Christian, while Arron Viktil recreates the role of Drew Boley.

Those taking in show time will be taken through a musical journey of big hair and big tunes featuring a soundtrack of the 80's which will bring back memories of the heyday for Bon Jovi, Styx, Journey and a range of others from that classic era of rock.

Show times at the Lester Centre are set for 8 PM for Thursday, Friday and Saturday's presentations. Owing to some language and themes, the show is recommended for those 14 years and older. 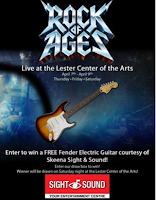 Tickets are going for 30 dollars for adults, 25 dollars for students and are available at the Lester Centre of the Arts Box Office and through Cook's Jewellers.

Terrace based Sight and Sound is joining in on the rock and roll vibe of the weekend, celebrating Guitar month, the music store will be hosting a display of Fender products at the Lester Centre on Saturday night

Those that drop by their display can enter to win a free Fender guitar, the draw takes place at Saturday evening's finale.
Posted by . at 10:48 AM

Email ThisBlogThis!Share to TwitterShare to FacebookShare to Pinterest
Labels: Rock of Ages