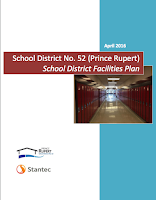 A comprehensive review of the facilities of School District 52 provides North Coast residents with a snapshot of the state of repair of area schools is now available on the School District 52 website, as SD52 officials prepare to make their case for capital spending for schools on the North Coast.

Prepared for the School District by Stantec Consulting, the review examines and identifies future facility space requirements as they relate to enrolment, capacity and building condition.

Of the eight SD52 facilities in Prince Rupert/Port Edward reviewed by Stantec all but one were considered to be in Good condition, with two listed as Poor and three others listed as Very Poor. 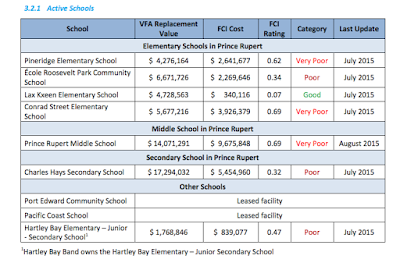 The three schools in the most need of immediate attention are Prince Rupert Middle School, Conrad Street and Pineridge, which all rank poorly on the Facility Rating Index. Noted under those guidelines as nearing the end of their life cycle.

The School District at the moment is also in possession of three Inactive Schools, with all three rated as in Very poor condition according to the Facility Rating Index. 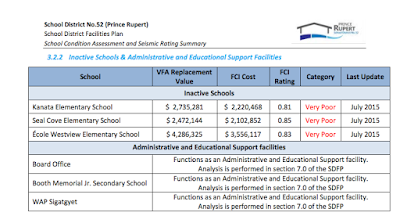 When it comes to seismic risk for SD52 schools Prince Rupert Middle School is rated as having a High Risk, while Conrad Street School is listed at a Medium Risk.  The remaining schools of the SD52 system are rated at Low, with no rating or part of a leased building. 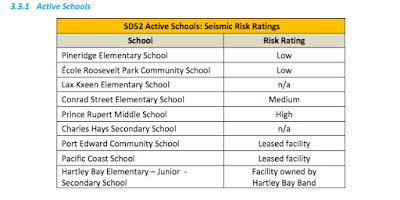 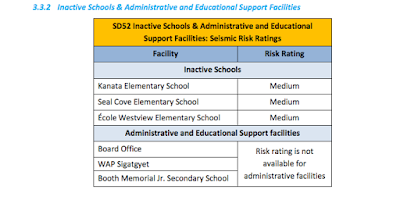 At their April 12th Board meeting the School District noted that the plan forecasts for an increase enrolment coming from port related development in the community.

Much like the City of Prince Rupert, the School District is looking with optimism towards the prospect of LNG development and other major industrial activity to boost its numbers, while noting that such development will provide for challenges when it comes to facilities.


The population projections have the School District making note of the need for Replacement and Expansion  of its existing facilities, noting that many would reach capacity with an influx of students to the North Coast.

The Prince Rupert Middle School which has been flagged by the School District as the facility most in need of replacement was noted in the Summary and Recommendations portion of the report.

Two other elementary schools, Conrad and Pineridge were also noted as requiring major investments to remain viable in the long-term.

The report also notes that Charles Hays Secondary should remain as the only secondary school in the community, adding that any increase in population would require expansion of the existing facility would be required.

The topic of the various closed schools and other land options is reviewed on pages 55 and 56, with one observation of a potential concept of a land swap between the City and School District involving the current site of the Prince Rupert Middle School, with that idea noted as part of any new school construction for the Middle School.

The Kanata School land sale is noted in the report, as is the closed status of Seal Cove which cannot be sold and would have to return to the Crown if not used as a school. The Westview School building is also included in the review, with the note that any plans to redevelop it for other than education use would require rezoning and Provincial legislation. The School District has in the past suggested that the Westview School building could be re-purposed towards administrative requirements.

You can review the full School District Facilities Plan here.

For more items related to School District 52 see our archive page here.
Posted by . at 9:58 AM