With consultation sessions and assorted workshops now behind them, Prince Rupert City Council moved forward with its 2016 Financial plan on Monday evening, approving both the Five Year Financial Plan and the Property Tax Bylaw for this year.

The City's Financial Officer Corinne Bomben noted that at a Special Council Session held on Thursday, April 7th, that Council had directed staff to incorporate a zero percent increase into the five year financial plan and related property tax bylaw.

She then delivered the financial details of the City budget for 2016, seeking the approval of council to move forward with the financial blue print that will provide the expenditure resources for the city for the year ahead.

The revenue streams to the City will bring in close to 16 million dollars and three major sources provide for the bulk of that amount. With 43 percent of their revenue received from residential tax payers, 33 percent from business and 19 percent from the Major Industry Port Property Tax Act:


The Residential tax share is 2 percent less from one year ago when it was noted at 45 percent, while the Business property class tax has increased by 3 percent from last years projection of 30 percent.

With assessed property values on the increase, the projections would indicate that both of those categories will be delivering higher amounts of revenue to the city.

The total 15.8 million amount for 2016 is up from last years overview, when the city had projected revenues from taxes of 14.9 million dollars.

Municipal property taxes and User Fees and Charges provide for the bulk of the city's funding sources for the 46.5 million dollar budget for 2016, with each contributing over 15 million dollars towards that amount.


The use of Municipal Property Taxes at 34 percent as a funding source is also up from last years projection, when 30 percent of the proposed funding was to be taken from Municipal property taxes.

Four key areas are noted in the Financial Plan document as to where the City plans to spend that money.  With the largest portion of just over 31 million dollars going to the Operating Fund, while the Water Utility Fund will take a ten million share of the expenditure, up significantly from the numbers of 2015.


The breakdown on how they plan to allocate the funds to the Operating Fund can be reviewed in the chart below (click to expand).

The three largest expenditures are directed to the RCMP (4.9 million) the Fire/Rescue Department (3.4 million) and the Airport Ferry (2.6 million)

Those three departments have received increases compared to the numbers projected from one year ago. 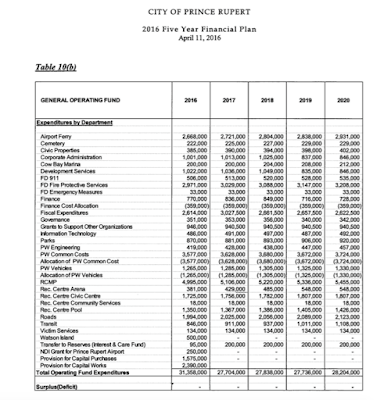 The full documentation on the 2016 Financial Plan can be found on the Agenda for Monday's council session starting from page 84.

Those looking to chart the city's progress on the financial plan for this year, can review the 2015 version from the city's document archives for comparisons, it can be found here starting at page 143.

As Councillor Thorkelson noted in her review of the document, the City has taken $505,000 out of the Accumulated General Operating surplus account for its budget purposes, the City's CFO advised Council that now leaves that account with an unaudited amount of 3.9 million dollars in reserve in the Operating surplus.

For the most part, it would appear that Council will  be relying on the transfer from surplus, along with increased assessment values on area properties to deliver the financial resources to deliver their operations for the year ahead.

City Manager Robert Long offered up some points to consider related to the process, observing that it was important for the community to recognize that the expenditures have not increased from last year, which he explained was Council's definition of a zero percent tax increase.

Adding that as assessed values go up in the city, they can reduce the weight of which they collect taxes so that they only collect the fifteen million dollars noted in the Budget Bylaw. Something that they have accomplished by using the changes in the actual number and amount of assessed values in the community this year, compared to last year.

Councillor Thorkelson provided for the main commentary from Council related to the two Bylaws on the night, observing that Council hadn't had a chance to go over the final version of the budget, something that led to a vigorous exchange between her and Mayor Brain.

The mayor reminded the councillor that there had been a number of opportunities to review the budget information prior to this final draft, through the city's budget workshop process.

Councillor Thorkelson however offered a rebuttal to those comments, holding to her position on the theme of review, noting that the discussions mentioned by the Mayor involved a form of the budget that did not make up the final document being considered on the night.

The main talking point for council on the evening appeared to be the declaration of no tax increase for 2016, with Mayor Brain wondering aloud as to the last time that such an accomplishment had been reached and asking that staff research that achievement.

Councillor Thorkelson calling on her long period of time on Council noted for the Mayor that former Mayor Jack Mussallem had a similar achievement in his first term of office.

For taxpayers, while the city has not increased the mill rate for 2016, it would seem that any increases found from property assessments in the city could bring an increase to your tax bill from last year.

If your assessment from January was up from last years totals from BC Assessment, there's probably a good chance, even by holding the line on a tax increase to the mill rate, that your tax bill in May will see some kind of an increase from what you paid in 2015.

Not to be forgotten for taxpayers in the community is the increase found in the utility bills of January this year, which Prince Rupert residents found in their mailboxes in February of this year.

Seemingly abandoned for this year, is any plan to set aside funds for asset renewal priorities, something that Council had put a focus on during their Community Engagement session of March 15th.

In the discussion period following Ms. Bomben's report of Monday, no member of Council addressed that topic as part of their comments related to this years budget.

You can review the presentation of the two financial bylaws as well as the follow up discussion related to them from the City's Video Archive, the topic is introduced at the 54 minute mark.


Some background on the path towards the conclusion of the Budget Process can be found from our Budget 2016 archive page.