The Provincial NDP is now firmly in the ranks of those opposed to the proposed Pacific NorthWest LNG terminal project at Lelu Island, outlining a number of their issues of note related to the development as part of the current CEAA process.

In a March 10th submission to the CEAA, John Horgan, the leader of the British Columbia NDP and George Heyman who serves as the NDP's Opposition Spokesperson for the Environment raised  a number of concerns related to environmental issues and Aboriginal engagement when it comes to the proposed development.

The NDP's contribution to the discussion notes that their caucus has created four criteria for any project to be considered acceptable to British Columbians:

Government respect and make partners of First Nations and recognize their right to share of any benefits that flow from the resource.

B. C's air, land and water must be protected, and resource development should be as clean as possible.

From that list of the NDP's criteria, their submission to the CEAA highlights the areas where they believe the Pacific NorthWest LNG project is considered deficient.

Among the ares of concern, the NDP's belief that the Pacific NorthWest LNG proposal does not meet the condition of concern for First Nations objections based on the risk to the future of Salmon in the area and the Skeena River salmon ecosystem.

The NDP also outlined that to their view the proposal fails to meet the condition of air, land and water protection, with respect to both the threat to marine habitat and species, as well as to climate through unacceptable high and inadequately regulated greehouse gas emissions.

Mr Horgan and Mr. Heyman conclude the NDP's submission by noting that "until and unless these deficiencies are addressed, we urge you to withhold final recommendation for approval." 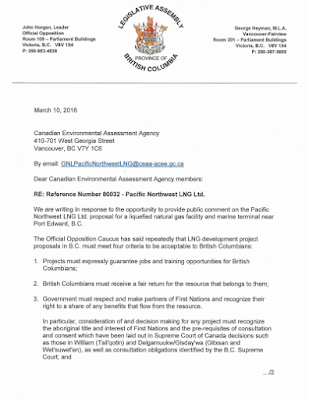 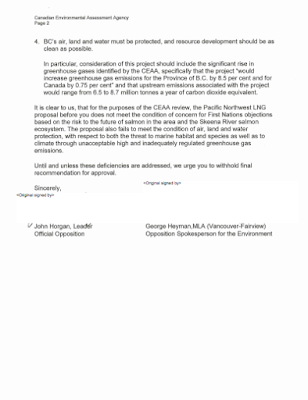 The full letter to the CEAA can be reviewed here.

The NDP correspondence is one of 7,151 comments or responses received to this point by the CEAA as part of their engagement process.

The full listing of those comments and access to the search engine for it can be found here.

The CEAA process is currently in the midst of a 90 day pause, with the regulatory clock not expected to start again until June, at which time it is anticipated that the Federal Cabinet will provide its decision on the status of the North Coast project.

You can find more background on the Pacific NorthWest LNG project here.

Email ThisBlogThis!Share to TwitterShare to FacebookShare to Pinterest
Labels: BC NDP submission to CEAA process on Pacific NorthWest LNG