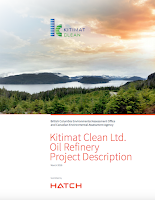 The proponent for one of the three competing Oil Terminal projects for the Kitimat area has taken another step in its plans to ship oil out of the North Coast, with Kitimat Clean submitting a project description to the Canadian Environmental Assessment Agency in March, putting in motion the paperwork for their proposed refinery development.

Besides an introduction to the project, the Kitimat Clean document which was put together by Hatch Limited,  provides a review of nine different areas, ranging from Regulatory issues, General project info and location background, Aboriginal consultation, Environmental information and the effects that the project may have on the immediate area.

Should Kitimat Clean receive approval for the project from federal regulators and secure the funding required for as ambitious a project as it appears to be, the economic impact on the entire Northwest could change the nature of the Kitimat-Terrace corridor and beyond.

In the construction phase of the proposed development it's been estimated that some 7,000 workers would be required through the course of the projects five year timeline.

Upon completion there would be 1,250 direct jobs and another 1,250 contract jobs connected to the refinery and terminal operations.

The overview reinforces many of the previous points made by proponent David Black, who is heralding the Kitimat Clean project as one which fills a need when it comes to finding a way to deliver oil from Alberta to world markets.

The newspaper publisher who owns the Black Press chain among his investments has been advocating for a Canadian solution to the export of Canadian resources for a number of years now, with Mr. Black speaking to the viability of his project since he first introduced the concept in August of 2012.

Key to the documentation provided as part of the overview is the Aboriginal Consultation plan that is in place.

With Kitimat Clean noting of its desire to identify opportunities to enhance mutual economic and social benefits related to the project, as well to hold meetings with community member and one-on-one leadership meetings to better understand Aboriginal Groups' interests and concerns.

Included in the project overview is a listing of the consultation sessions that have already taken place with a number of First Nations across the Northwest.

Transportation will also be a key element of the terminal development.

The bitumen that will be turned into refined product will be delivered to the proposed refinery by rail, making use of the CN Rail main line through Northern British Columbia with a spur line created south to the Refinery location between Terrace and Kitimat.

Ships that will arrive and depart from the terminal location will follow a route that takes them from Triple Island along the coast and then with a transit along Douglas Channel into Kitimat and out.

Included in the presentation are a number of graphs, charts and maps that highlight the various areas of development and eventual shipment of the refined products out of terminal site proposed for the west side of Kitimat Arm north of Bish Cove.

The delivery of the 129 page project review brings the project into the CEAA information stream, starting a process that will require public comment periods and extensive overview of the impact of the project on the North Coast area.

The project however has yet to be added to the online data base at the CEAA.

The full document can be found here.

Some of our past background on the Kitimat Clean proposal can be found here.

The Kitimat Clean project is one of four proposed Oil shipment options that have been mentioned for the North Coast.

Two other companies, Enbridge Northern Gateway and Pacific Future Energy Corporation still have plans to deliver oil to world markets out of terminals in Kitimat.

In the mix as well is Eagle Spirit Energy, which is working on a proposal to ship oil out of a terminal at Grassy Point.

You can learn more about the status of those proposals from our archive page here.