Two hereditary chiefs that are involved in the quest to stop any form of LNG development on Lelu Island have issued a response to yesterday's notice from the Prince Rupert Port Authority, offering up their thoughts on the Port's notice to bring an end to the construction of structures on the island.

In a letter to the Prime Minister and other federal officials, including Skeena-Bulkley Valley NDP MP Nathan Cullen, Hereditary leaders  Simoyget Yahaan (Donnie Wesley) and Gwishawaal (Ken Lawson) ask the Prime Minister if he is in support of the actions by the Port. Noting for Prime Minister Trudeau that they consider Lelu Island to be unceded Lax Kw'alaams territory, adding that it is their position that the Port Authority has no claim of jurisdiction over it.

The pair also frame the issue in terms of the Liberal governments recent initiatives to provide for more engagement with First Nations across Canada, asking if this is an example of the Liberals plans for a renewed nation to nation relationship with Indigenous peoples.

The letter outlines a number of concerns that the two hereditary leaders have with the Port's views on the issue and also makes note of how they believe that the newly elected Mayor of Lax Kw'alaams has in their opinion gone against the wishes of many of their people. Noting their opposition to the recent delivery of a letter from the Lax Kw'alaams  Council expressing conditional support for the proposed LNG development at Lelu Island.

To conclude their correspondence they request that the Federal Government order the Port Authority to withdraw its letter immediately and add that they are contemplating building additional structures on Lelu Island, including plans to build a cultural institution at the site to serve a number of functions, including a meeting place, cultural and educational centre and healing place to name a few.

They also note for the Prime Minister and the other ministers that those plans might be something that the Federal Government's Canada 150 Community Infrastructure Program could be put to use towards, inviting the Federal government to provide matching funds for the community effort.

The letter was posted to the Stop Pacific NorthWest facebook page, the contents can be reviewed below (click to expand): 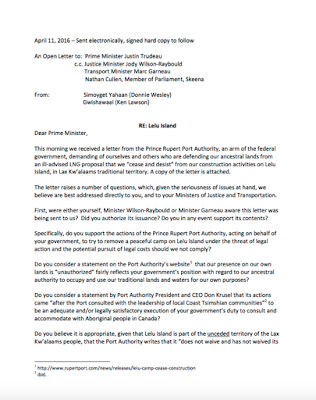 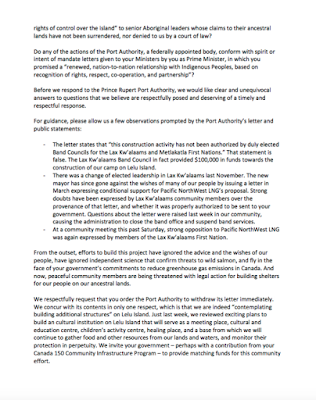 The Lelu Island issues returned to the top of the news cycle yesterday when the Prince Rupert Port Authority, after consulting local Tsimshian First nation representatives issued the notice to those currently occupying Lelu Island.

Advising that those currently on Lelu Island to stop with the construction of any more structures on the island, adding that the Port reserves the right to require that existing structures be dismantled and removed from the island.

You can review the background to yesterday's notice from the Port Authority here.

The Environmental process related to the Pacific NorthWest LNG proposal for Lelu Island is currently paused, while CEAA officials review some points of interest and seek further clarification from the project proponent.

The file is expected to be turned over to the Federal cabinet in June, at which time it is expected that a final decision on the fate of the proposed major project for the North Coast will be delivered.

You can review some of the past notes of interest on the Pacific NorthWest LNG files from our archive page here.
Posted by . at 10:21 AM

Email ThisBlogThis!Share to TwitterShare to FacebookShare to Pinterest
Labels: Response to Port Notice issued through letter to PM