The west end of the downtown core was cloaked in heavy smoke early this evening as Prince Rupert Fire/Rescue responded to a house fire in the 900 block of Third Avenue West, with three of a string of homes along the south side on fire.

Additional crews were called in to fight the alarm that was reported towards 6-6:30 tonight, winds whipped up the smoke directing it towards the Fraser Street region as the flames jumped from one house to another, all of which are tightly placed beside each other.

Fire Crews worked hard on the scene, looking to determine if anyone may be still in the structures, while also looking to try to keep the fire from spreading to the Pacific Inn hotel, located just to the east of the buildings that were on fire.

As a result of the fire, Hydro service was cut to some parts of the area as the blaze took out some of the hydro poles in the area.

A number of videos posted to social media show the fire fighters attacking the blaze from both the ground and from ladders perched above the block.

Police on the scene have kept the curious a fair distance away from the immediate area to allow the Fire/Rescue department to work the fire.

UPDATE:  Fire Crews remained on the scene of Wednesday's fire well into the afternoon of Thursday watching for any flare ups, securing the scene and preparing for the investigation of the blaze on Third West which kept much of the city's fire department on the scene well into the night.

So far, Prince Rupert Fire/Rescue officials have not determined the cause of the structure fire, which left one house completely destroyed and two others with extensive damage. No injuries were reported as a result of the Wednesday evening fire. 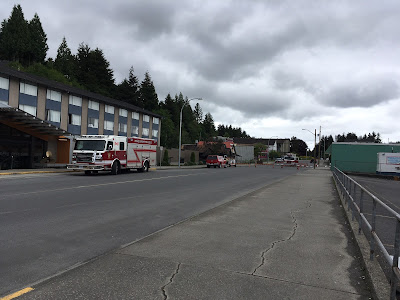 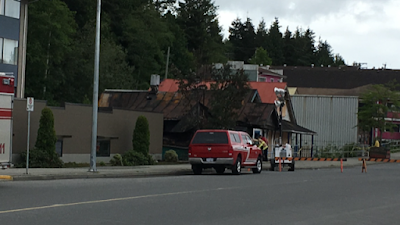 For more items of note on the work of Emergency Responders in the Northwest see our archive page.