With few votes to spare, the Upper Chamber of Parliament has finally provided its approval to Bill C-48, the Oil Tanker Moratorium Bill that has had a somewhat controversial and at times near fatal transit towards its final status of approved.

On Thursday the Senate reviewed the bill which had been returned from the House of Commons just a day before; a document which had previously been recommended by a Senate Committee to be abandoned.

With the work of the Senators of June 20th the process of review and debate finally found some closure, that after a parliamentary journey that began on May 12th of 2017 and lasted just over two years and provided for much in debate and discussion both in Ottawa and on the North Coast itself. 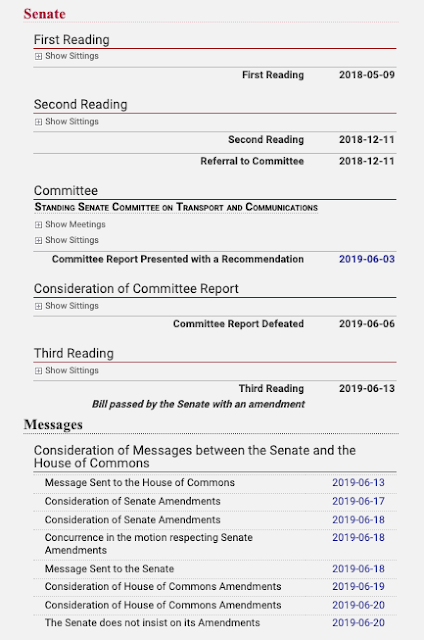 Even as it was working its way through the final day of review by the Senators, the discussion in the Chamber reflected some of the concern that some of the Senators had towards the bill, while those in support advocated for its passage.

And after a few tweaks to the original intent over the last month, the Bill finally made the finish line with a vote of 49 to 46 with one abstention.

A vote count which left Skeena-Bulkley Valley MP Nathan Cullen to celebrate the bill's final success, while at the same time calling attention to the dangerous path that the Senators had travelled.

Prior to the Bill's return to the Senate, Mr. Cullen had provided for what marked his final House of Commons commentary in support of the Bill and the fifteen year journey he had been on to see the Oil Tanker Ban be put into place.


While now passed, the future will still find Bill C- 48 steeped in controversy and remaining under a political microscope.

The Alberta government has indicated that it plans a legal challenge to the legislation and with a Fall election campaign on the way, Bill C-48 may very well make for a key election theme particularly for those seeking office in Alberta and British Columbia.

Even with it now in place, the Bill Still comes with a condition, as part of the back and forth between the Senate and House of Commons, C-48 will be subject to a review in five years time to ensure that it continues to meet the intent of its drafting and has not caused the dire consequences that some that are in opposition to it have suggested will now be delivered on Canada's energy sector.

Proponents of the Bill however, are spreading the word of the Bill's success, with North Coast MLA Jennifer Rice, a long time advocate of the ban sharing her enthusiasm earlier this week through her social media streams, included in her notes was a video of her testimony to the Senate panel two months ago in Prince Rupert.

For more items of note from the House of Commons see our archive page here.

Further items of note related to the theatre of politics in the Nation's capital can be explored from our Blog D'Arcy McGee.
Posted by . at 9:16 AM