For the most part, the youngsters and their parents are ahead of the city on the reopening of parks, with some already having returned to some of the civic facilities across the city.

However, today the City of Prince Rupert made things official.

With the City Announcing that they will be using a phased in approach towards the official re-opening of Parks and Tot lots.

Once barriers such as caution tape, signs, or fencing are removed, the space will be inspected and then open for public use. Please note, that the playground equipment is not being cleaned or disinfected.

Today's announcement which was relayed through the City's Social media stream, and City website offered up some guidelines, as well as health and safety advice for those planning to use the civic facilities. 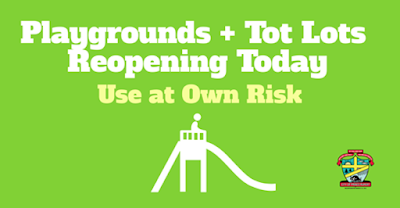 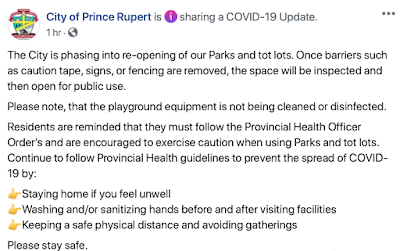 The City parks were closed to the public in mid March as the COVID-19 pandemic began to spread across the province. The city began a cautious re-opening plan last month, with the city's Dog Park on McKay Street the first of the civic spaces to re-open.

The move towards a wider re-opening comes after a number of other communities around the Northwest have already re-opened their community parks and facilities as the next phase of the COVID response rolls out.

Port Edward allowed its residents to access its parks and fields last Wednesday .

More notes on themes from City Hall can be reviewed from our Council Discussion archive.
Posted by . at 4:22 PM

Email ThisBlogThis!Share to TwitterShare to FacebookShare to Pinterest
Labels: City to reopen parks and Tot lots