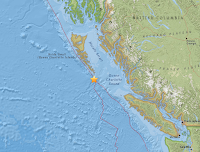 Another mid range temblor has been reported from the fault line running along the North Coast, with a 4.1 magnitude quake recorded at 10:02 this evening off of Haida Gwaii.

No reports of damage were indicated and no Tsunami threat was generated by the evening event.

The seismic event is just the latest of a string of similar sized temblors to strike the fault line between Haida Gwaii and Vancouver Island in recent months, you can review some of the background on those from our archive page.

Update: the initial temblor of 10:02 was followed by a similar sized second rumble forty one minutes later.
Posted by . at 11:27 PM