UFAWU vows to fight cannery closure; calls for all levels of government to support Prince Rupert


The depth of the shock and anger in the wake of Thursday's announcement by Canfisco of plans to close the Oceanside canning lines, was on full display at Fisherman's Hall on Friday,.

As local workers employed by the Canadian Fish Company gathered at the iconic Fraser Street Union Hall, looking to learn more from their union executive as to what may be ahead for them.

Sitting at a table in front of the assembled plant workers, UFAWU representatives Arnie Nagy, Conrad Lewis and Joy Thorkelson expressed the concerns for the future of many of those in attendance, highlighting their frustration and at times obvious anger at the moves of Canadian Fish.

George Baker from the CBC provided the first glimpses from yesterday of the simmering frustration from the members of UFAWU. With Mr. Baker noting in a string of tweets through twitter, of some of the proposed actions by the unionized workers ahead.

Among their comments a promise to carry the fight on into year ahead and to seek to make sure that none of the cannery equipment in the plant is removed. 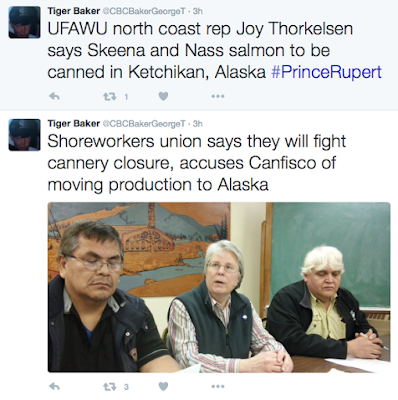 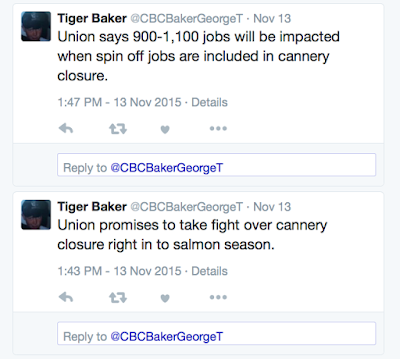 An expanded understanding of that UFAWU approach would be delivered later in the evening with a report from CFTK's Christa Dao, who provided more background to the tension at Fishermen's Hall and the call for action not only for the workforce, but from all three levels of government.

The full overview from Friday's meeting can be found here.

As part of the follow up to the union executives comments, Mayor Lee Brain, outlined some of his thoughts on the nature of the situation, following up on his earlier comments made Thursday shortly after the announcement of the closure.

And while he said much of what might be expected in a situation such as this, he did not provide any details as to what actions, if any,  that the City could take in this instance. For the most part, what Friday offered was more along the lines of moral support when it comes to a matter between company and employees.

Likewise, NDP MLA Jennifer Rice was in attendance and added more thoughts to go with her statement of late Thursday, noting how the decision to close the Prince Rupert cannery will have a significant impact on communities along the Skeena River.

Still to be heard from however, was any form of comment from Nathan Cullen, the NDP MP for the Skeena-Bulkley Valley riding.

As of today, Mr. Cullen has yet to make any statement, or offer mention of the major hit to the Prince Rupert economy through either his constituency website, or by way of his very frequently used social media platforms of Facebook or twitter.

That oversight to this point is puzzling, considering how the MP made use of the cannery as a photo op backdrop during his recent election campaign, see here and here.

Perhaps leaving those members of UFAWU that may have cast their ballot in favour of Mr. Cullen, wondering if he may have a few words for them sometime soon.

As for the path ahead for the workers at the plant, they are vowing to continue their push to try and save the cannery operations into 2016 and the summer cannery season, whether Canfisco has any intention of reversing their plans will also play out during that period of time.

However, as of Friday, the fishing industry giant, part of the Jim Pattison Group of companies had not given any indication that any change in their plans to close the cannery is in the future, appearing to intend to still move forward with their restructuring program.

Following Friday's meeting at the Fishermen's Hall, a full review of UFAWU Northern Representative Joy Thorkelson's address to the workers was posted to a YouTube site, you can find those comments here.

Any further updates for the community most likely will be delivered through the UFAWU Facebook page, which first delivered news of the closure plans on Thursday afternoon.

For more items related to events of the last few days, as well as for general items when it comes to the fishing industry on the North Coast see our archive page.
Posted by . at 3:23 PM