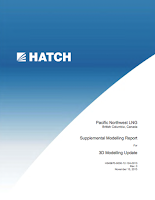 Pacific NorthWest LNG has submitted a number of wide ranging reports to the Canadian Environmental Assessment Agency, a follow up to a request for further information, part of the environmental review process related to their application to develop an LNG Terminal at Lelu Island.

Notification of the release of the information from November 10th was posted to the CEAA website and highlights much of their ongoing research on the site.

Those taking the time to review the full volume of the work will note that the findings deliver a fair number of different observations and summaries from those noted by a study conducted by members of the Skeena Fisheries Commission and Lax Kw'alaams Science team last month.

Among the reports compiled for Pacific NorthWest LNG were contributions by Hatch and Stantec, two of the companies contracted by by the LNG proponent to conduct studies around the Lelu Island area.

The documentation which has been delivered to the CEAA this month, features reviews of their work conducted since May 5, 2015.

In the Executive Summary of the Hatch report, the nature of the work that they engaged in as part of their research is outlined, with a significant focus on the modelling conducted on Flora Bank, the centre point of concerns when it comes the proposed development at Lelu Island.

The review examined a number of questions related to the Flora Bank area including:

The effect of wind and wave conditions on the site location

The Executive Summary concludes with a statement that notes the impact of the development on the Flora Bank region.

Starting with a review of the robust nature of Flora Bank and how it would remain that way following Construction of the marine structure:

"modelling results support continuing understanding of the coastal processes at work and support continuing confidence that Flora Bank is robust and stable, both prior to and following construction of the proposed marine structures."


When it comes to what their research has identified towards impact on fish an habitat the report notes:

"Analysis efforts have identified no potential for a fundamental state change impacting fish and/or fish habitat, as well as no evidence of divergent or run-away effects. This is principally due to the moderate, broad flow fields within which the structures are located."

The Full Executive Summary can be reviewed here


A Response Summary also provides some notes on the process to this point prepared for the CEAA since May of 2015, answering a number of requests from the Federal agency that were made in June of this year.

Pacific NorthWest LNG included six points (see page 8 of the Response Summary) related to their research as part of their documentation:

A more expansive look at the research is also available from a collection of outlines related to a number of other studies conducted in the Flora Bank and Lelu Island area, you can work your way through that flow of information from this archive page from the CEAA.

Among the many selections from those files to review, the topic of eel grass study is one which received a fair amount of attention. With an interim report from Stantec providing some background to their work of this summer included in the documents.

You can review the eel grass overview here.

The CEAA Review is expected to be concluded either late this year or early in 2016.

More background on the proposed development can be found from our Pacific NorthWest LNG archive page.