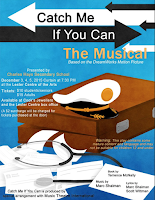 Set designs, costume creations and all those little details that highlight a Charles Hays production are in their final stages, with much of that behind the scenes work moving towards a deadline that is fast approaching.

And while all of that is coming together, the cast and crew are busy in rehearsals working their lines and setting up their cues. All of that, as this years theatre presentation from Alison O'Toole makes ready for the December 3rd opening night at the Lester Centre.

Catch Me If You Can is this year's selected production and since the early days of September Ms. O'Toole has been leading the cast and volunteers of the production towards the first week of December.

The annual production from the Secondary School is one of the highlights of the Lester Centre calendar, with the compressed timeline from sign up to showtime making for perhaps a few frayed nerves along the way, but in the end, as past shows have shown the effort and dedication of all shows through.

This years production is a musical adaptation of the DreamWorks Motion picture, a Hollywood blockbuster which featured Leonardo DiCaprio, Tom Hanks, Christopher Walken and Amy Adams.

And because of some of the themes from that script, the CHSS stage presentation comes with the advisory that it contains some mature content and language and my not be suitable for children 12 and under.

With less two weeks left for rehearsals, opening night will soon be here, the start of a three night run that takes place from December 3 to 5.

Tickets tend to go fast and advance seats offer up the chance to grab an early seat and save a bit of money while you're at it.

Advance tickets are available at the Lester Centre Box Office or at Cook's Jewellers, the cost is 10 dollars for student/seniors and 15 dollars for adults.

For those that like to wait for show day, there will be an extra two dollar surcharge for tickets bought at the door on the night of the shows.

The Curtain goes up on Catch Me if You Can at 7:30 on each of the three nights.

Email ThisBlogThis!Share to TwitterShare to FacebookShare to Pinterest
Labels: Catch Me If You can takes to the stage Dec 3 - 6