They may have dropped from official opposition status and lost a number of their caucus from the last election, but for the 44 NDP MP's in the House of Commons there is still work to do and for Skeena-Bulkley Valley  MP Nathan Cullen it's a case of double duty.

NDP leader Tom Mulcair has assigned two posts to one of his most senior MP's, with Mr. Cullen given the responsibility of watching over the Environment and Democratic Reform files.

Mr. Mulcair's statement and outline of the new duties for the NDP MP's can be reviewed here.

“Our shadow cabinet is ready to get results for Canadians and ensure the new government fulfills its promises for change,” ...“This is a strong NDP team that’s ready to move forward with hope and optimism.” -- NDP Leader Tom Mulcair introducing his shadow cabinet

When it comes to the issues of the environment Mr. Cullen will bring many of his ideas and themes from the Northwest to the House when the Federal Parliament returns to work.

In particular he will now be watching over the files from that department with a number of major industrial projects in the works for the Northwest.

Included in those talking points will be the fate of the Pacific NorthWest LNG project for Lelu Island, with the CEAA set to deliver its final findings sometime this year or early in 2016.

His new post will also give him opportunity to provide his thoughts on the promised moratorium on oil tankers for the North Coast among other issues.

Through the 2015 campaign the NDP MP made mention of his past tours of the riding when it came to matters of  the environment and resource development and the need for Social Licence for many of the proposed projects in the region. A theme he will most likely continue to raise with his new duties as NDP critic on Environmental matters.

As for the Democratic Reforms file will provide the NDP MP to look to hold the new Liberal Government to account when it comes reforming the way that Parliament works, with such topics as Senate reform and electoral reform high among the areas of potential discussion.

Mr. Mulcair's statement today outlined the approach that Mr. Cullen will be taking towards his twin duties in the House of Commons.

Mr. Cullen shared his excitement with the new duties by way of twitter today. 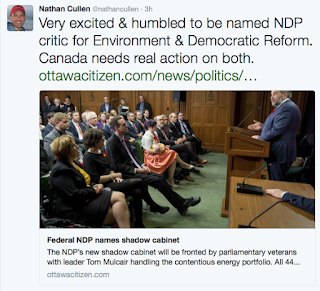 However, the fate of a third party is somewhat different than those heady days as the official opposition and may take some time to get used to. With the NDP numbers having dropped from 95 MPS when the election was called, to the 44 that now head for Ottawa, sixteen of them brand new to the ways of Parliament.

Mr Cullen and his fellow NDP members will also no longer be holding the main spotlight when it comes to opposition time in the House of Commons. From the verdict of the voters of October 19th the NDP station in the House will be one of seeking to get their message out to the public without quite the same glare of the media spotlight.

As the official opposition the Conservatives will be allocated the larger amount of time and resources to provide the checks and balances for the new Liberal government and for the most part will be the first place that the media will turn to for comment on Liberal initiatives.

The challenge for Mr. Cullen and the NDP will be to carve some space and time to continue to push for what they are describing as their progressive view for the Parliament ahead.

The MPs return to their desks in the House of Commons on Thursday, December 3rd.

You can review some of the notes from today's NDP announcement below:

For more notes on the work of Mr. Cullen in Ottawa see our archive page here.
Posted by . at 11:00 AM