Lax Kw'alaams residents will be heading to the voting booth in but two days, as they prepares to make their selections from a lengthy list of candidates for positions on local government in the community.

Thursday's vote will be conducted from two locations the Lax Kw'alaams Fire Hall on Church Street in Lax Kw'alaams and at their Prince Rupert community office at 100 1st Avenue East.

Balloting is set to take place from 9 AM until 8 PM.

Last  month the notice of election outlined that voters would be selecting 1 Mayor, 12 Council Members and 5 School Trustees during the 11 hour voting window of Thursday.

In the race for Council positions the field is a crowded one, with 40 candidates listed on the Official Candidates List as October 14th.

The quest for the Mayoralty will require a little less research by voters, with three candidates, John Helin, Bob Moraes and Carl Sampson Jr. looking to unseat incumbent Gary Reece.

Only one candidate's name appeared on the official list from the Lax Kw'alaams Band, with Elaine Miller listed as Acclaimed. 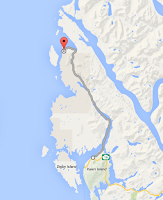 Thursday's election takes place with a range of issues up for review by the residents of the community north of Prince Rupert, with the main focus at the moment on developments on Lelu Island and how the local government of the community will be moving forward its title claim high among the discussion topics.

A new council will also have to address the apparent split between First Nations in the region that have begun to appear in the wake of the developments related to Lelu Island.

As well, key for those that will be elected on Thursday will be engagement with other communities along the North Coast and with the provincial and federal governments.

There are also items of interest related to fishing issues in the community, as well as other development, investment, social concerns that the Band Government may have to consider in the years ahead.

Results will be counted on Friday starting at 9 AM at the Lax Kw'alaams Elders Hall on Church Street.

You can review some of the news items over the last year from Lax Kw'alaams from our archive page here.
Posted by . at 9:35 AM