A strong first period set the tone for the Prince Rupert Rampage as the home side picked up half of their six goals on the night in the first frame, an offensive output that propelled them to a 6-2 final over the visiting Lac La Hache Tomahawks.

The first period of Rampage scoring came thanks to a fair amount of undisciplined play by their guests, as Lac La Hache took eleven penalties in the first twenty minutes. Opportunities which provided Prince Rupert with two power play markers in the first period, the first from Kory Movald at 1:54 with an assist going to Josh Cook.

Cook would pick up an even strength goal four minutes later unassisted, while the third Rampage goal of the first came again on the Power Play, as Jared Meers and Kory Movald set up Josh Cook's second goal of the period.

With a 3-1 lead going into period two, both teams traded off scoring plays in the middle period, as Kory Movald added to the Rampage lead at 2:12 with a short handed goal, assisted by Jared Meers. The Tomahawks would get that one back five minutes later, taking the two sides into the dressing room with the home side in the lead 4-2 with twenty minutes to play. 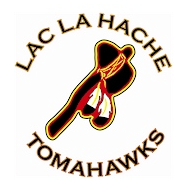 The Third period would be all Rampage, with two more markers on the night to put a wrap on the scoring plays, with Josh Cook capping off the night with his final goal to claim the hat trick, with Jared Meers and Marcus Atchison claiming the assists at the 11:27 mark.

The final marker making for a five point night for Cook, while Movald was right behind him with four points on the evening.

Saturday's game in front of 725 fans at the Jim Ciccone Civic Centre as noted above, featured a busy evening for the linesmen, referee, timekeeper and score sheet compiler. As the Tomahawks, who have yet to find a win since the start of the season took out some of those frustrations in a string of penalties through all three periods.

By the time the evening came to an end, the Tomahawks had been assessed 87 minutes of penalty time on 27 infractions, much of it in a third period of fighting majors, unsportsmanlike conduct penalties and even a Game ejection.

The Rampage while not backing down to the challenges, did a much better job of keeping things in check, assessed only 43 minutes in penalties on 17 infractions.

Jarrod Hildebrandt saw 50 minutes of action on Saturday night facing 15 shots and recording 13 saves, Cole Ardsev went into the nets with ten minutes to play, facing only one shot during his tour of duty in the wild third, turning the one shot aside with little difficulty.

The Rampage fired of 81 shots on the night at Lac La Hache's William Sellars, who despite his teams loss put in a solid evening between the pipes, keeping his team in the game for the full sixty minutes, as he turned aside 75 of the Rampage attempts.

You can review the full score sheet from Saturday night here.

The burst of goal scoring also provided a boost to the Rampage Goals campaign in aid of the Prince Rupert Salvation Army, as Saturday night's work saw the Prince Rupert Port Authority add another 600 dollars to the fund to help community programs in the city.

That brings the total amount of donations through the 2015-16 season to 2300 dollars so far, with the prospect of additional money heading the way of the Salvation Army good, as the Rampage have three more home dates left in the regular season. 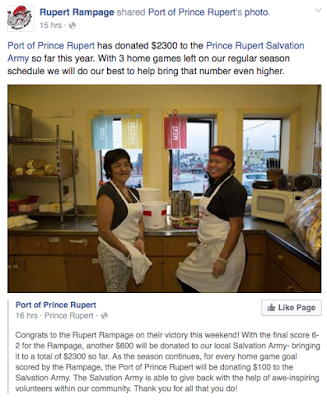 Saturday night's victory moves the Rampage back into First place for now in the competitive Western division, with 4 wins, 2 losses and OT loss providing them with 9 points on the year so far, one ahead of Smithers and three above both Terrace and Kitimat.

However, that placement in the standings is most likely going to change before Prince Rupert sees action again. The Rampage have the next two weeks off, an opportunity to work on their game and make preparations for the always challenging road trip into the Cariboo.

That ever popular endurance test will see the Rhinos head to Quesnel and Williams lake on the weekend of November 28 and 29.

For a look back at Rampage results to this point of the season see our Results page here.

Further background on the Rampage and other notes from the CIHL can be found on our Rampage archive page.
Posted by . at 9:38 AM