Those that like to track the port calls of shipping lines into the Port of Prince Rupert through the Port Authority arrivals and departure listings will be seeing a new container line listed in the near future.

Coming in December will be sightings of a major French shipping line which has signed on to share slots at Fairview Terminal with the COSCO line, making for yet more international attention as to what Prince Rupert has to offer.

CMA CGM announced this week that they will be debuting service to Prince Rupert and while it won't increase the number of port calls, owing to the shared nature of the COSCO slots, it does give the French line an entry in the Pacific Gateway. 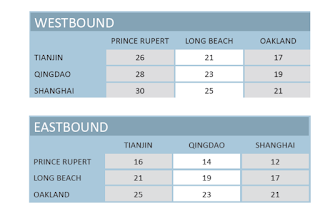 The Journal of Commerce, an influential business publication heralded the move by CMA CGM as another indication of the success of the Prince Rupert Port Authority strategy to attract more US bound cargo to make its way to North America through the Prince Rupert option.

The arrival of CMA CGM adds a new flag to the board and will continue to add to the volume of cargo that is passing through Fairview, an amount that is getting close to capacity of the Prince Rupert facility.

Though as Don Krusel, the Prince Rupert Port President and CEO noted for the Journal of Commerce, the current success for the Port is showing no indication that those volumes are causing any congestion problems for Fairview.

Any potential concern over possible congestion issues will soon be reduced significantly, as the second phase of the Fairview Terminal expansion program moves forward.

As those that have travelled to the west side of town will have noted of late, work continues at a strong pace on the site to the north of the existing Terminal at the old McMillan Fish property.

It's anticipated that Phase Two will be in operation by mid 2017. An update on the progress of that expansion can be found from the FRPD-BEL gateway website


Mr. Krusel also indicated a glimpse of the potential future for the publication, advising that  the Port has received the necessary permits for a southern expansion.

And while the decision to move forward on that plan is not finalized as of yet, the much anticipated Phase Three proposal, if approved would see Fairview shift its focus to the south and travel along the shoreline towards the Ridley Island side of the harbour.

That would serve to create a third container terminal berth and an expansion of available container storage space,  making for a project which would increase the annual capacity of the Port of Prince Rupert to 2.4 million TEU's.

Considering the growing interest in the ability of Fairview to move cargo in an efficient and timely manner, it would seem that at some point the hard number crunching will be underway to move on the Phase Three proposals.

You can review the item from the Journal of Commerce here.