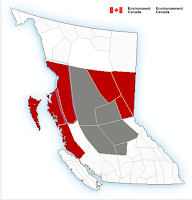 Update: See below for BC Ferries Notice

Some nasty weather is on the way for the Northwest as Environment Canada issues a number of Weather Warnings for three regions this afternoon.

The Warnings issued through the day today highlight the approach of a low pressure system offshore that is about to arrive and with bring strong and potentially damaging winds and further east accumulations of snow.

Weather Statements were also issued for areas of the Bulkley Valley and on towards the Prince George area. Wind Warnings for the North Coast and Haida Gwaii were issued this morning providing details on the prospect of winds from the Southeast of up to 110 km/h developing by the morning. Shifting to the West at 100 km/h before the system moves inland.

Rainfall for the North Coast region is anticipated to be at around 30-44 mm over the next 24 hours. (Click on images below to enlarge)

A Snowfall warning for the North Coast inland areas calls for accumulations of 15 to 20 cm for Terrace, Kitimat and Stewart through the day starting Monday morning.

You can follow updates for those forecasts from the links below

Air and Water Transportation options may be affected by the weather, as well as highway conditions for those travelling to the east, you can find out those road conditions from the Drive BC website or twitter feed.

Update: 6:45 PM -- BC Ferries issued a Service Notice for service between Prince Rupert and Skidegate, noting a change in arrival time at Skidegate on Monday morning.
Posted by . at 4:18 PM

Email ThisBlogThis!Share to TwitterShare to FacebookShare to Pinterest
Labels: Weather Warnings across Northwest for Monday