Yesterdays punch to the gut when it comes to employment on the North Coast provided  for a few comments from local politicians on the theme of where we go from here.

That as one of the city's largest employers in the fishing sector delivered word of the major changes ahead.

As we outlined on the blog yesterday, the Canadian Fishing Company, delivered the surprise announcement Thursday morning, with an information release from Canfisco that outlined the nature of its restructuring plans and announcing the end of salmon canning operations in the city.

A decision that left union officials shocked at the latest developments for an industry that has seen many in recent years. And while the officials at the Fraser street offices of UFAWU may have been surprised at the turn of event, they were not alone in their reaction to the news.

Prince Rupert Mayor Lee Brain took to his Facebook page to provide his first response to the developments, a shift in the industrial base which could have a devastating impact on seasonal and permanent employment options for many in the community.

Expressing his thoughts on what he described as unfortunate news for the community and observing as how the salmon economy is one of the key industries for the region.

Mr. Brain also outlined that he will be communicating with both officials of Canfisco and the union members, in order to get a better understanding of the impact to the community. 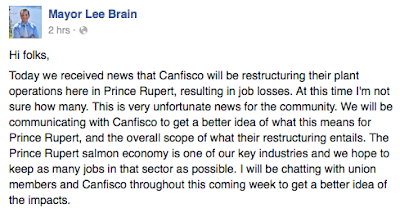 North Coast MLA Jennifer Rice also released a statement on Thursday evening, calling a sad day and offering her thoughts for the community and calling for the community to work together at this difficult time.

Ms. Rice also noted that she intends to attend the meeting of the UFAWU membership called for all members this Friday morning at 10:30 in Prince Rupert. 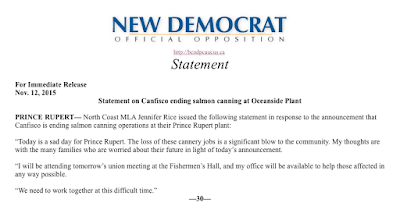 NDP MP Nathan Cullen, has not, as of yet, issued any form of statement or provided any comments related to the closure of the cannery in his riding.

More of the ongoing issues of the North Coast fishery can be found on our archive page.

Email ThisBlogThis!Share to TwitterShare to FacebookShare to Pinterest
Labels: Canfisco to close canning lines at Oceanside plant in Prince Rupert