See Update from Hydro at bottom of the page.

Residents of the North Coast found themselves powered down at 3:24 on Monday afternoon, with a regional power outage affecting both the City of Prince Rupert and outlying areas amid some strong winds crossing the area.

BC Hydro made note of the outage on their website shortly after the first reports, noting that the blackout appeared to be related to a permanent fault along the transmission system. 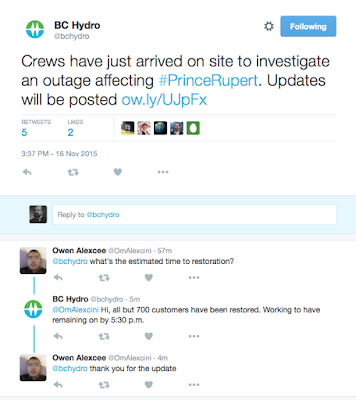 By 4:45 in the Afternoon they were reporting the return of power to the region, making use of the Prince Rupert Gas Turbine to generate power, with the hopes of having turbines on line and delivering power to all areas by 6:00 PM 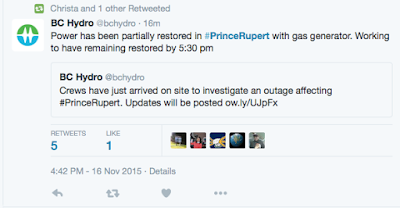 Further updates as to the ongoing issues of the transmission line will most likely be delivered through he BC Hydro website as the evening moves forward.

Update November 17: On Tuesday, BC Hydro outlined more background on the power transmission line incidents, explaining that two landslides inland have taken place impacting on the ability to transmit power from the east.  Five structures were damaged in those incidents as well as damage suffered at the Brown Lake Independent power station.

The City currently remains served by the Prince Rupert Gas Turbine Plant, with larger industrial customers operating at a reduce capacity at this time.

No timeline as to when BC Hydro expects to have repairs made to the damaged infrastructure and when the North Coast will be returned to the main transmission grid.
Posted by . at 5:08 PM