The union representing shore workers at Prince Rupert's Oceanside cannery is taking its fight to save North Coast jobs on to the national capital.

Through a media statement from this afternoon, UFAWU-Unifor  leadership outlined the next stage of their efforts on the job loss issue, stating that if the Canadian Fish Company which is owned by the Jim Pattison Group cannot generate good jobs with its control of the west coast salmon fishery, then the federal government should revoke their licences.

In their statement, the union also noted their belief that a corporate licence to fish Canadian waters is not a right, but a privilege that comes with responsibilities to Canadians.

"Fish caught in northern BC waters should be processed in a north coast plant," ... "Canadians own the resource, pure and simple. Residents of the north coast deserve jobs in return for granting a multinational corporation a licence to fish these waters." ..."If Jim Pattison Group is unwilling to create cannery jobs, those salmon licenses can go to independent and First Nations fish harvesters, like most commercial fishing licenses on the east coast."  --  Joie Warnock, Unifor's Western Director.

The Jim Pattison Group, is the parent company of Canadian Fish, which operates the Oceanside cannery and Seal Cove plants in Prince Rupert and holds a number of fishing licences on the North Coast.

In the media release, UFAWU-Unifor representatives also expressed their concerns over how the impact of the closure could be a devastating development for the community.

One week ago, Canadian Fish outlined its plans to shut down the canning lines at the Oceanside Plant, citing declining volumes of fish and high costs as among their reasons for the closure.

The moves of today by UFAWU-Unifor, follow along with recent comments from Nathan Cullen, the NDP MP for the region, who noted though his Facebook page this week of the need to develop laws to get companies to process fish caught in Canadians waters in Canada. 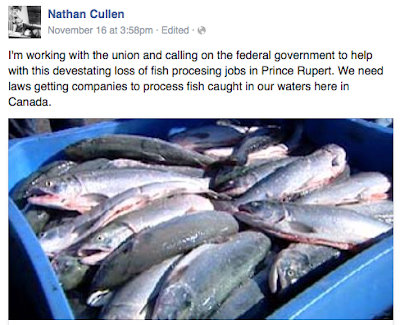 You can review more of the UFAWU-Unifor statement here.

For more background on the Canadian Fish decision and other items related to the North Coast fishery see our archive page here.
Posted by . at 1:13 PM