They haven't provided any details as of yet, but some bread crumbs on the Hawkair Website are indicating that the Northwest based airline is about to reduce its service to the Prince Rupert airport.

A pair of notices posted to the twitter sidebar on the Hawkair website indicate that the airline is reducing capacity during the slower winter months, adding the note that they "hope to be back by summer" an interesting choice of wording that might provide for some concerns for the Prince Rupert Airport Authority and those that like to fly out of Prince Rupert by way of the Terrace based airline.

Hawkair says through their twitter notes that the reductions are a decision that they have made in the past, with the promise that more details will be released soon.

Something that local officials will no doubt be looking forward to.

As we outlined earlier this year, the airline suspended its service to the Smithers market in August, however the Smithers airport is still served by Air Canada and Central Mountain Air.

Hawkair recently signed an arrangement with Ginglox Enterprises a Nisga'a company to provide training and employment opportunities for members of the Nisga'a Nation, suggesting that the Terrace hub will remain the main focus of the company operations.

The reduction in Prince Rupert will leave residents with Air Canada as their only other option for air travel out of the Digby Island airport, a prospect which could see even more passenger traffic being driven towards the Terrace airport and its larger flight options.

We will update this story as more background from Hawker is provided to the public.

For more background on Transportation issues in the Northwest see our archive page.

Update November 26 -- The Terrace based airline Hawkair issued a statement on Thursday afternoon, outlining the nature of the changes to come for their Prince Rupert-Vancouver service, as well as a modification for its service between Terrace and Vancouver.

And while the regular schedule will be suspended for Prince Rupert as of December 1st, the airline did note on their twitter feed from the company website, that there will be special flights between  Prince Rupert and Terrace on December 9, 13 and 23rd as well as on January 2 and 3. 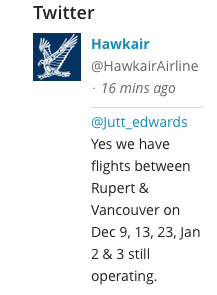 The main reason given towards the decision, is that of what Hawkair calls the seasonal slowdown in Prince Rupert. From that business concern, the company will be moving their aircraft towards higher demand travel areas such as Terrace, Prince George and Kelowna. The changes take effect as of December 1st.

The full statement from Hawkair can be found here.