All Native Qualifying Tournament Draws released for next week's action 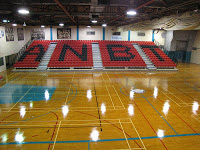 The countdown to some fast paced basketball is on, as Organizers of the All Native Qualifying tournament release details for some of the draws for  the basketball showcase next week at the Jim Ciccone Civic Centre.

Teams have confirmed entries in Four divisions of the ANBT event to qualify for the big show of February, with games scheduled from Thursday to Saturday (Nov 26-28)  in the Women's and Intermediate, Senior and Masters Divisions for Men.


Participants in the three day Fall qualifying tournament will be arriving in Prince Rupert from as far away as Vancouver, Ahousat, the Central Coast, Alaska, Haida Gwaii and eastbound into the interior of the Northwest and the Nass, as well as from local communities on the North coast.

ANBT organizers note that there is no live streaming for the Qualifying tournament of next week However taking in the action live comes at a bargain of an admission price, with rates set at Five dollars a session or 30 dollars for the three day pass. 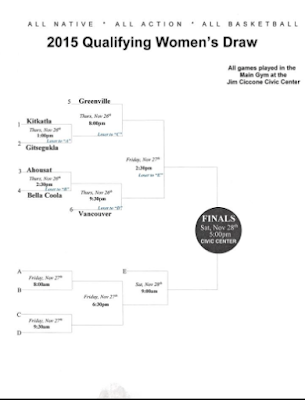 Teams finding success during the November 26 to 28 event will be earning their berth into the 2016 edition of the 2016 All Native Tournament set for February 8th to 13th.

Planning for the annual tournament that brings Prince Rupert to life in February is well underway, with the latest update provided through the ANBT website

Some of our past items related to the All Native Basketball Tournament can be found here.
Posted by . at 8:25 AM