The inbox at the Prime Minister's office is quickly filling up and among some of the reading material for the new Prime Minister and his Environment Minister will be a pair of correspondences from those that are opposing the plans of Pacific NorthWest LNG to develop a terminal on Lelu Island.

On Monday, details were released explaining the coordinated approach between First Nations members from Lax Kwa'alaams and environmental and conservation groups across the country, along with the fish industry union UFAWU.

All of which have submitted a a pair of letters to both Prime Minister Justin Trudeau and Environment Minister  Catherine Mckenna urging the Federal government to stop the proposed Lelu Island LNG terminal development.

The letter was the creation of Sm'ooyget Yahaan, Donald Wesley of the Lax Kw'alaams who is currently leading the occupation of the Lelu Island lands.

His correspondence to the Prime Minister consists of three pages of background to their concerns, including three pages of signatures offering support for its contents.

The outline of the position of those that oppose LNG development at Lelu Island, highlights some of the past developments related to their concerns and reminds the Prime Minister of some of his comments during the recent election campaign, noting his commitment to the concept that while governments grant permits, only communities can grant permission.

Observing that if the Prime Minister stands by those commitments, then he will not allow the Pacific NorthWest LNG project to be approved by the CEAA and will direct the current geotechnical work currently underway on Flora Bank to cease.

The letter ends with a call to Mr. Trudeau and Ms. McKenna "to stand with us and the communities along the Skeena River to protect wild salmon for the sake of all future generations."

The group also provided copies of their letter to a number of other cabinet ministers, as well as to Premier Christy Clark.

The full text of the letter can be found on the pages below (click to enlarge): 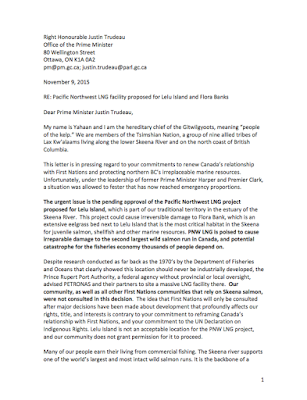 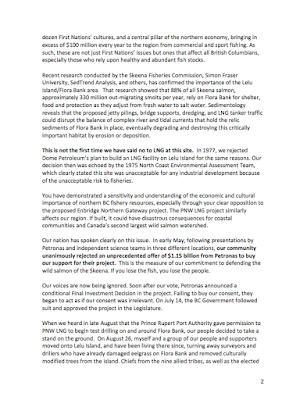 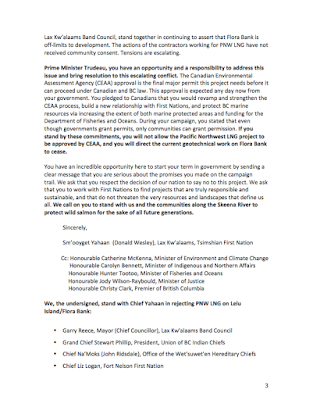 Among those from the North Coast that have signed the document were Lax Kw'alaams Mayor Gary Reece, Murray Smith of the Kaien Island Friendship House Elders and Dr. Barb Faggetter, who has conducted research on the topic of Lelu Island and currently is the City of Prince Rupert's Resident Scientist.  A number of local environmental groups also offered their support to the letter.

A large volume of support also came from environmental and activist groups outside of the North Coast region, as well as from some familiar names on the national scene.

Included on the list of those signalling their support for those opposing any LNG terminal development on Lelu Island were: Grand Chief Stewart Phillip, President of the Union of BC Indian chiefs, Dr. David Suzuki, author Naomi Klein and Dr. Alexandra Morton who has been a frequent observer on fisheries issues among the more familiar names signing the document.

The full list of those that have signed the document can be reviewed here.

An accompanying letter was also forwarded to the Prime Minister and Environment Minister from UFAWU and some of the local environmental groups calling for the rejection of the project outright.

Calling attention to the recent study conducted by Lax Kw'alaams that raised a number of concerns related to the proposed LNG development at Lelu Island. We outlined the details of that study last moth on the blog, you can review those findings here.

The letter from  UFAWU and the environmental group makes note of the importance of the Flora Bank region of Lelu Island to the Skeena River ecosystem and to communities across the Northwest.

Among those offering their support to that document were Joy Thorkelson, Northern Representative of the United Fishermen and Allied Workers' Union and member of Prince Rupert City Council, as well as Des Nobels, the Northern outreach coordinator with the T. Buck Suzuki Environmental Foundation and a current member of the Skeena-Queen Charlotte Regional District.

The full letter can be examined below (click to enlarge): 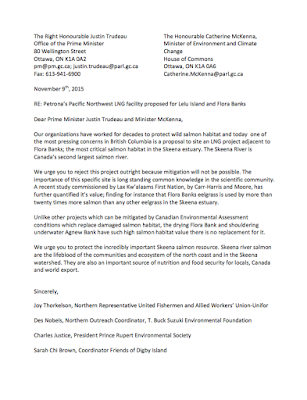 Further background on the twin approaches to the Federal Government can be reviewed through the Facebook page created by those looking to stop the development efforts of Pacific Northwest LNG.

You can find more information related to the proposed development on Lelu Island from our archive page here.
Posted by . at 1:08 PM