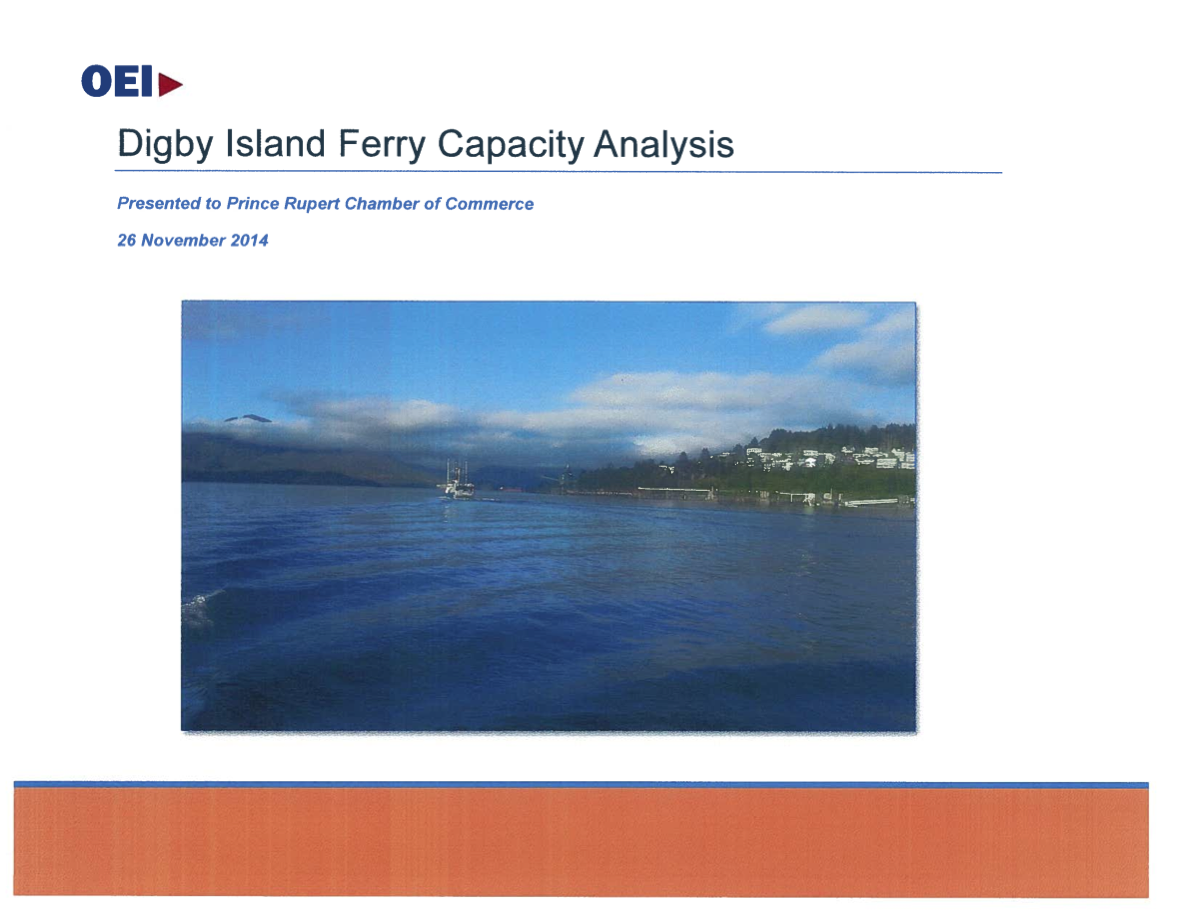 City Council may have put the prospect of a fifty cent increase to fares for the airport ferry on the back burner for now.

But in the New Year, that slight potential increase for transportation may be but a minor consideration, compared to some of the larger issues that the local airport may be facing.

Last month, the Chamber of Commerce delivered a report to the City, providing background from a project that the Chamber had commissioned the Vancouver based Operations Economics Incorporated to conduct.

That research group was tasked to explore some of the transportation concerns related to the nature of our system of moving passengers from the downtown area to the Prince Rupert airport.

In particular, the review provided a glimpse into the bottleneck that could soon be the transit between airport and downtown, should industrial projects proposed for the area get the go ahead.

Outlining the challenges that the transportation system features from the dock infrastructure, to the age of the buses in service on the airport run and the limitations that the capacity of the system may provide should airline service increase to the community.

The Thirty eight page report, made use of interviews with seventeen contributors (see page 38), including members of the Chamber of Commerce, the local LNG industry contacts, City of Prince Rupert representatives and Port of Prince Rupert and Airport officials.

Broken down into eight sections, the report starts with an Overview of the current situation and whether the Airport has the capacity required for what could be a surge in passenger travel in the years to come.

Use of the Ferries, population and Air Traffic trends mark much of segment two.

Infrastructure is the focus of Section three, providing a review of the Digby Island ferry vessel, dock infrastructure and the current status of no plans in place at the moment regarding Renewal or Replacement of the Digby Island Ferry. That section reviewed some of the past proposals for renewal of the service, making note of a report from 2010 that examined some of the options that the City could pursue, a collection of recommendations which we haven't heard much about of late.

Operations and Administration of the system also gets a review, examining the revenue stream and deficit involved with the operation of the Airport Ferry transportation system. The Analysis makes note of the financial breakdown, a collection of data which shows that over fifty percent of the expenses on the Ferry service come from wages and benefits, followed by the actual Bus Contract, Fuel Expenses and provisions for Refit also claiming large portions of the expense file.

Capacity is the category that would seem to make for the most potential for future discussion, with the Chamber report making note of the constraints the current system has and the problems that may provide for, should there be a significant increase in air movements in and out of the Prince Rupert Airport.

Section 6.6 focuses on the capacity question in detail, suggesting what might be considered a bit of a nightmare scenario of sorts. Providing the overview of how it would look at YPR, should a number of aircraft arrive in short order at the airport.

A situation where if the current transportation link remains as it is, could result in wait times of up to three hours for travellers to transit to and from the airport to the downtown core.

Should such a scenario of passengers cooling their heels at the airport for three hours ever came to pass, it would seem likely that such a situation would give residents of the North Coast cause to reconsider their travel options.

With the Terrace airport the most likely to benefit from such any such Prince Rupert bottleneck.

The concept of such large scale delays outlined in the analysis, is based on the prospect of increased industrial development, with LNG or other large projects flying in workers by way of charter jets.

And while the potential arrival of hundreds of workers at the same time as the regularly scheduled services into Prince Rupert might make for a fairly busy airport terminal; considering the investment that LNG companies would be making in those projects, it would seem safe to suggest that they might have an alternate plan for transportation in mind.

The prospect of tight work time lines and the logistics of such a large scale project, probably would find those companies inclined to secure their own transportation options, beyond the stressed out City Ferry service to move those workers and materials to Prince Rupert and their respective construction sites.

The major LNG companies and their contractors may seek out transportation suppliers from a local service that might fill that need, an opportunity that might offer up a chance for the City to explore other transportation options beyond the current Airport Ferry system.

Beyond that, creative air scheduling around the scheduled airlines, might help relieve the congestion that would come during the construction phase of the LNG or other industries.

Findings and Implications make note of the perception of low level of service that passengers already have of the current service and how LNG companies may find the current benchmarks for passenger transfer as something of concern.

As for Options, the final segment of the report, the analysis provides the suggestion of purchasing a larger ferry, or a second ferry to service the route to and from Prince Rupert.

The first recommendation of a larger ferry would seem to be something which at the moment would appear to be the thing of wish lists, particularly considering the City's current financial limitations and concerns of the moment.

The second option of  second vessel, would require an entire second complement of staffing, which considering how the report highlights staffing as the largest expense, would seem to be a prospect that might be hard to sell to an already stretched tax payer base.

As well as the vessel situation, the report also reviews the current dock infrastructure improvements that will be required and suggests the prospect of relocation for better transit times between the city and airport.

While the analysis observes that revenues could increase with the potential increased level of activity at the airport, once the major construction projects are complete, one imagines that levels of use would return to more familiar levels.

Whether enough revenue would be generated in that short construction window, to cover the expense of the enhanced service proposals, is one of those great questions that Council would have to consider.

Those interviewed for the survey, suggested a historic opportunity for change is here and may not be repeated. Which may be true, but City Council has to deal with the limitations it has financially at the moment when it comes to that service.

Still, the report, like those before it, once again puts the issues of the Airport Ferry front and centre for the new Council and Mayor Lee Brain.

The age of the current system, its imitations and the perceptions of the service, should provide for a fair amount of material for City Council to consider, as they seek a solution to what has been one of those ongoing issues for past Councils. 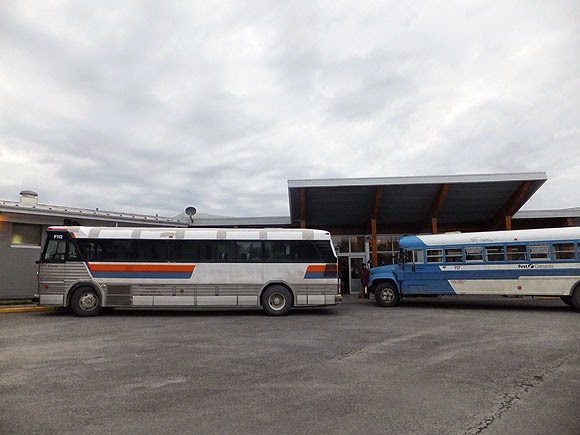 There is no doubt that the current transportation arrangement from downtown Prince Rupert to the Airport, isn't working well for the City of Prince Rupert. With the City for the most part having to carry the burden of providing the service for the benefit of the larger area.

Taking the approach of the need for some discussion and assistance from the communities of the region, as former Mayor Mussallem suggested earlier this year, might be one way to address the issues.

As would seeking out more cooperation from the Province of British Columbia, highlighting how transportation is key to the provinces LNG strategy. That is a topic that the North Coast MLA Jennifer Rice might be able to advocate for the City in the Legislature.

In addition to the community to community approach, perhaps a conversation with the large scale industrial proponents regarding the transportation issue might provide some relief for the City.

One of the LNG proponents, Pacific NorthWest LNG has just announced a number of funding arrangements in the region.

One with the District of Port Edward, the other with the Metlaktatla Governing Council.

And while those arrangements won't take place unless the project is given a Final Go Ahead, both communities seem to have benefited from respectful and collaborative discussions.

Mayor Brain and Council may find that taking their transportation issues to the industry that will require access to the airport as a key part of the creation of their projects, may make for a good opportunity to try and join in on that spirit of cooperation for the entire region.

You can examine the full report from the Chamber of Commerce from this link to the City's Information Package to Council for December 9th, the Airport findings can be found from Page ten and beyond.

For more background on items related to the Prince Rupert airport see our archive page here.

For other discussion points from Prince Rupert City Council see our archive here.
Posted by . at 11:19 AM