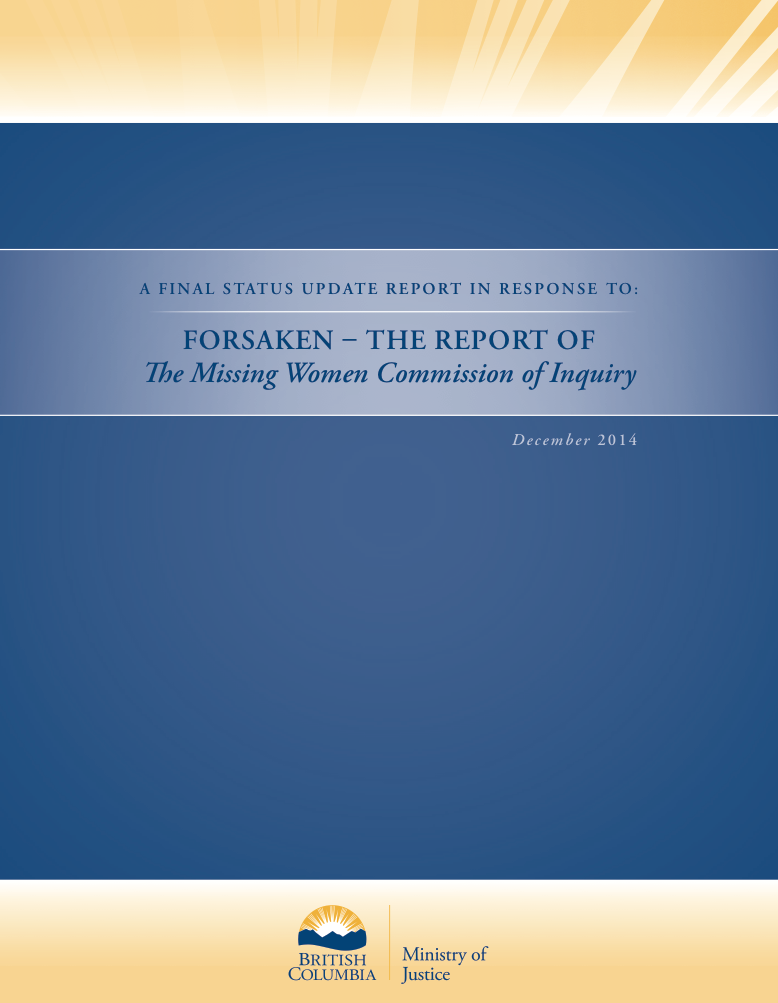 Last Thursday, the Province of British Columbia outlined the scope of what it called  "hallmarks of government action to date" when it comes to the recommendations of the Missing Women Commission of Inquiry.

Making note of the government's efforts and progress when it comes to the 56 recommendations directed to the Provincial government, releasing the background on that work as part of the Final Update Report released on Thursday (see report update here)

Among some of those key items of progress from the Government review include:

Compensation payments to each eligible child of the murdered and missing women, providing services and supports as needed.

As for items related directly to the communities of the Highway 16 corridor, the area where a large number of the missing and murdered women have come from, details on a pair of initiatives were announced by the government.

The expansion of cellphone service along 160 kilometres since 2009 with further investments towards northern public transportation options.

As well as what was described as practical solutions addressing transportation concerns, including a new web based portal that provides information on transportation services along the corridor, as well as 75,000 dollars in one time funding for increased education, safe driver and driver licensing programs for First Nations.

The latter two items in particular have caught the attention of North Coast MLA Jennifer Rice, who made quick work of the declaration of progress that the Province delivered on those themes.

On Friday, Ms. Rice offered up some of her thoughts, with an information release that addressed some of the government's results, particularly when it comes to Transportation concerns along Highway 16.

The MLA called attention to the length of time that has elapsed since the Missing Women's Commission first outlined its recommendations and then took issue with the pick and choose nature, that the province has adopted on those recommendations.

“It’s been two years since the Missing Women’s Commission said offering safe, accessible transportation along the Highway of Tears was an urgent recommendation which should be implemented immediately,” ....“Now the Minister of Justice is saying that this, and other unfinished recommendations simply aren’t important.” --  MLA Jennifer Rice on Missing Women Report Update of December 2014

As for the website that the Province directed our attention towards and which outlines the transportation options available (see here), it does seem to come up short when it comes to any practical use to the larger theme of transportation issues of the region.

For the most part, the new initiative appears to be mainly a telephone and website directly of sorts, with access to numbers for local transit and services within each community. One section of it provides the phone numbers to seek out information on Greyhound and Via Rail travel options in each community.

The irony of the provincial site project coming from the fact that the real issue is not the ability to make a call to check on the status of the bus or train, but rather it is the frequency of those service options.

For many across the region, it is the schedule that those transportation options operate under that clearly contributes to the concerns of the situation at the moment.

By highlighting the information option, the government only seems to reinforce its apparent tone deaf nature to the larger issues that are on the minds of many across Northern BC.

A point that the North Coast MLA makes fairly effectively in her information release of Friday.

“If anything that website they threw together highlights just how inadequate this government response is. The website doesn’t even list transportation services to and from Nass communities, for example,” -- MLA Jennifer Rice on Missing Women Report Update of December 2014

While it's reassuring to see some progress made on the lengthy list of recommendations from the Missing Women Report, Transportation is still the one major area, where even the Provincial Government admits a bit more effort is required.

On page sixteen of its Update the government makes a status note of the transportation issue that states:   Progress made. More work is required.

Both the Minister of Justice and the Transportation Minister, should be working quickly to address the key point of concern when it comes to those transportation options in the area, issues that have been raised frequently by MLA Rice in recent months.

The puzzling aspect of the whole approach that the province has taken on the topic, is the nature of their consistent ability to deflect their work away from the concerns when it comes to public transit between community to community.

Among some of the solutions offered over the last year, one has been the suggestion that perhaps the time has come to fund local communities to provide inter community transportation options, making use of such options as a shuttle bus from community to community.

While one other possibility is for the government to consider some kind of subsidy to the current carriers of the region to provide more frequent connections between the North Coast and the Central Interior.

It's that one topic on access to options, that appears to make for the majority of the concern regarding the Commission discussions on transportation, a topic that the government continues for whatever reason to ignore.

Until the Province offers up a much more clear and detailed response on that issue and delivers on the declaration that more work is required, then the perception that the Provincial Government keeps ducking the transportation issue will remain.

And with that lack of proper review, transportation will remain a topic that deserves continued discussion both across Northern British Columbia and in the Legislature.

For more items when it comes to developments out of Victoria see our Legislature Archive page here.
Posted by . at 9:49 AM