Council approves Capital Works Purchases and Projects, but not without some discussion on the Legacy Corporation 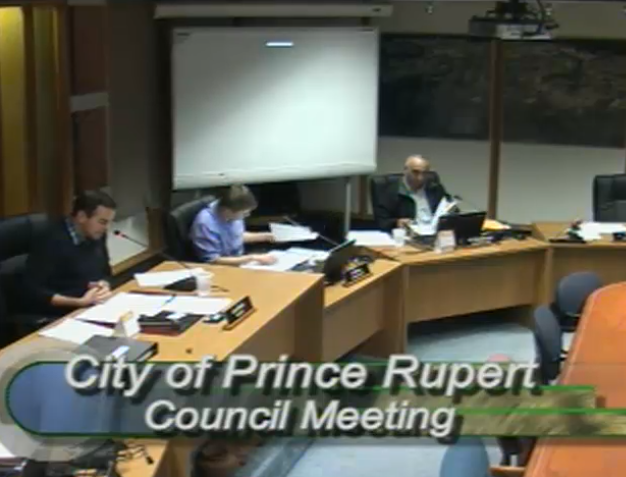 Prince Rupert City Council put in motion the process for City staff to move forward a number of Capital works projects and purchases  on Wednesday evening, approval required to allow for proper planning for a number of items for the 2015 schedule.

To provide some background on that process, Council received a Review of the request (not included as part of the Agenda for the night) from the City's Financial Officer Corinne Bomben, who outlined the nature of the process for Capital Works Projects and purchases and highlighted two key projects for the year ahead.

One, the need to expand the city's landfill area, a topic that has been under discussion at Council for a number of weeks in the last year.

The second major item of note was work to be conducted on an access road for the Woodworth Dam, the first phase of a project to address the city's water reservoir issue in the years to come.

During the outline for the Woodworth Dam project it was noted that the work there will benefit from some funding coming from grants that the city is applying for, as well as from dividends directed by the Prince Rupert Legacy Corporation.

That second source of funding for the project is through the instrument that City Council has chosen to utilize to make use of money received from the proposed LNG Terminal currently being investigated by Exxon/Mobil for the Tuck Inlet area, across from Seal Cove.

The Legacy Corporation recently made for a conversation topic at the recent Public Hearing into the Lot 444 question. At that hearing, questions were raised regarding the lack of perceived Council oversight when it comes to the Corporation and its operations.

As well, some concerns were expressed over the nature of the set up of the Legacy Corporation, which at the moment is currently led by a trio of Senior City staff members.

You can review that forum and the commentary from December 3rd here.

As part of the discussion of Wednesday evening by Council regarding the Capital Works and Projects request, the topic of a recent workshop held by the City for staff and Councillors was reviewed, a session where it appears some discussion on the Legacy Corporation and its revenue stream was explored.

From those discussions came some concerns from Councillor Blair Mirau regarding the need to allocate a dividend from the Legacy Corporation revenues, towards future renewal of infrastructure concerns, such as the Woodsworth Dam project as it reaches the end of its lifespan.

While that made for a spirited discussion from a number of Council members on the theme, in order to move  the Capital Works Projects and Purchases motion ahead, Council voted in favour of the request as it was outlined by staff, with no reserve policy put in place regarding Mr. Mirau's proposal.

Following that vote, Councillor Mirau then put forward a second motion, one that directs staff to develop a reserve policy regarding Funds from the Prince Rupert Legacy Incorporated, a motion that also was carried as part of the night's discussion.

That process it would seem, will make for future discussion as the Council Budget process moves forward into 2015.

For many residents the mechanisms and purpose of the Legacy Corporation still might seem a bit of  mystery, particularly as it seldom is given much of an overview in public session of Council.

From Wednesday, we have received a glimpse when it comes to the direction that the Legacy Corporation may be heading, particularly that of funding major infrastructure projects.

However, there still seems to be a lack of information for the public on the process as to how those decisions are being made, or a listing of where any money received to this point, may have been allocated.

Considering that much of that ongoing conversation  at Council on the Legacy Corporation remains the thing of in house discussion and not as part of a more detailed public overview during Council sessions, the mystery for many residents regarding the purpose and process of the Corporation will seemingly remain in place for now.

Those impressions are a topic that Council might wish to address sometime in 2015.

As well, the entire conversation can be reviewed from the City Council Video Archive.

Email ThisBlogThis!Share to TwitterShare to FacebookShare to Pinterest
Labels: Council moves forward with Capital Works Projects and purchases for 2015, December 2014