The growing  concern over a planned renovation of the Alaska Marine Terminal in Prince Rupert has both Tourism Prince Rupert and the Prince Rupert and District Chamber of Commerce speaking out regarding the important link that the Ferry Service provides to the region and the impact that the ongoing dispute could have with relationships between British Columbia and Alaska.

In a media release from Tuesday afternoon, the two local organizations highlighted the concerns that both groups have regarding the potential cancellation of the 15 million dollar upgrade.

Focusing on the consequences that the situation could have to not only the local economy and those of communities along the Highway 16 corridor, but to the passenger loads delivered to BC Ferries routes on the North Coast.

“The Alaskan marine highway terminal in Prince Rupert has had a tenuous history originating with the ferry blockade of 1997. The tourism industry of Prince Rupert and British Columbia understand the significance of this critical link from British Columbia to Alaska, we have a history of working closely with our neighbours to the North and are hopeful the leadership in Ottawa and Washington can work closely to ensure this investment can proceed to the benefit of both Alaskan and Canadians.” -- Scott Farwell, Board Chair of Tourism Prince Rupert

John Farrell, the President of the Chamber of Commerce, also highlighted the important economic factors that the AMHS provides to the community and the desire to see a solution to the controversy arrive shortly.

“The traffic to Prince Rupert resulting from the Alaskan Marine Ferry is a significant economic generator to our community. The Chamber remains confident the governments of our two nations will be able to mediate their differences to ensure the long term viability of the proposed new terminal.”

Both groups Tuesday observed that outside of the iron and steel issue, there is nothing in place that would stand in the way of Canadian companies supplying the labour and or supplies for the project, beyond the Buy America provisions of the steel requirements.

The full information statement can be viewed below: 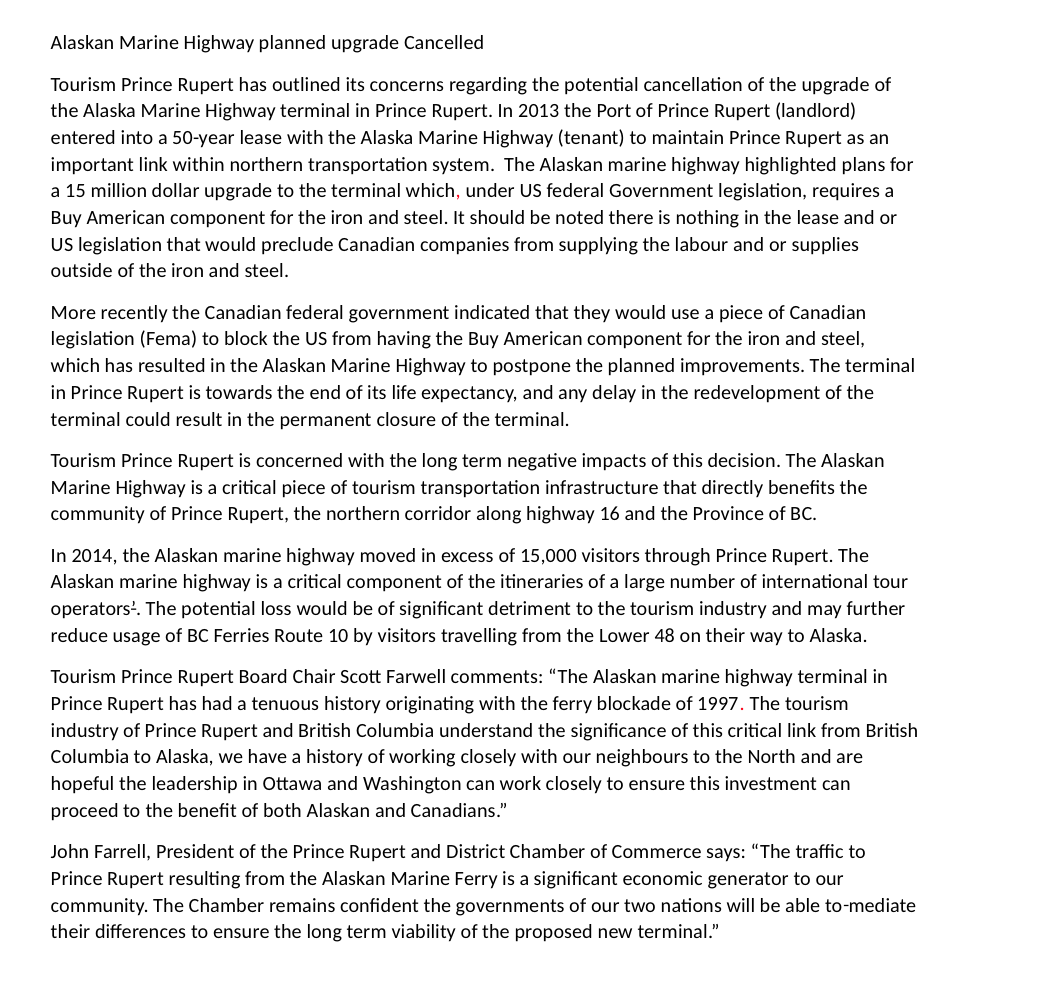 As we noted on the blog back in November, the Ferry Terminal issue while part of an ongoing concern for Canadian manufacturers, could provide for larger issues for Prince Rupert's Tourism sector, should the project be cancelled, or the AMHS begin to seek out other options for their Ferry Service.

Tuesday's information release, marks some of the first local commentary on the controversy that has popped up in regard to the Terminal project, offering the first real local perspective to an issue that has become a national story and made for conversation in both countries.

You can review our past items on the AMHS Terminal issue and the more recent international perspective on the whole situation from our Archive page here.

Items of note when it comes to Transportation through both BC Ferries and the Alaska Marine Highway Service can be found on the archive page as well.
Posted by . at 12:03 PM