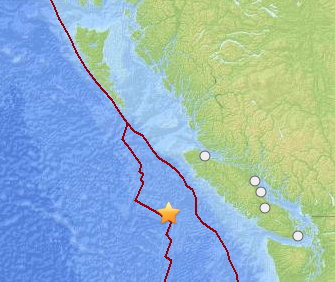 Another in a string of mild earthquakes off of Vancouver Island was noted by the USGS on Thursday evening, as a 4.4 temblor was recorded shortly after 10 PM.

The earthquake was located 213 kilometres Southwest of Port Hardy, though no accounts of it being noticed have been reported from the Island.

The temblor had a depth of 10 kilometres falling in between the two fault lines that run along the west coast of Vancouver Island.