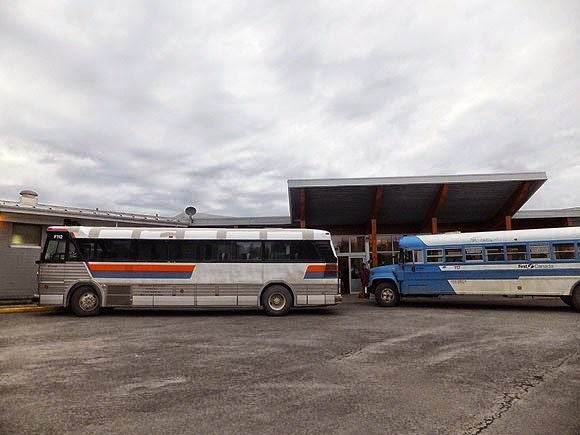 Prince Rupert City Council is holding the line on the bus fare to cross over to the Digby Island airport for the moment, putting aside on Monday evening a motion to increase the cost by fifty cents per crossing, pending further study on the matter.

The topic was one of the first items on the Agenda for Monday's Special Session of Council, as Mayor Lee Brain and Council members received a report from the City's Financial Officer Corinne Bomben, with the CFO recommending the increased fee as a way to provide for new buses for the transportation system in place between downtown Prince Rupert and its island based airport.

Explaining the aging nature of the current buses in use and some of the unique demands of the transportation infrastructure, the CFO outlined how the fifty cent increase per year to passenger fees, coupled with an increase of 3 per cent for other users of the Airport Ferry, would provide for funding for the new buses.

As part of the review in the Agenda package ( Starting from Page Three here), the report included a correspondence from the Chamber of Commerce regarding a survey that it had conducted on the issue of the buses used on the ferry (page 7 of the Agenda), which noted that over 82 percent of those who responded were in favour of the slight increase in the fees, if put towards new vehicles.

We outlined more background on the nature of that survey in this item from September.

Still, the idea of the City paying for buses for a private contractor proved to be a troublesome concept for Councillors Cunningham and Thorkelson, who had questions regarding the city subsidizing a private service which would then be free to use those buses for other uses, when not required on the Ferry.

The fear of sending residents to the Terrace Airport was also raised, with both Councillor Randhawa and Cunningham outlining their concerns that the proposed increases on a yearly basis over five years, might soon send families down the road to make their travel plans.

By the time the fifteen minutes or so of discussion was over, Council was putting the issue on the table, sending it back to City Staff for further examination  and more details regarding the proposal.

Councillor Thorkelson offered up a suggestion that staff seek out further comment from both the Airport Society and those airlines currently using the Prince Rupert Airport as to their thoughts when it came to the impact that the proposed fee increases may have on their services.

You can review the full range of discussion on the topic from the City's Video Archive, the Fee increase recommendation starts at the one minute mark

A full review of Monday's City Council session can be found on our Timeline feature.