Premier Clark stays her course on LNG, while corporate dynamics begin to shift 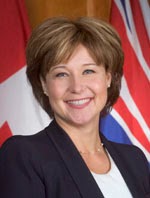 Premier Christy Clark has been on an eastern tour this week, first in Toronto and most recently in New York City, stops in the two financial capitals that have coincided with some very rough days for resource stocks and energy companies on all of the major exchanges of the two nations.

For the most part, the Premier has been busy in the east delivering her government's plans for LNG development and making a few comments that have caught the attention of the media back home.

And while Premier Clark reviews the LNG gospel to the financial markets, those companies that are considered the front runners in LNG development are making some news of their own, with some observers suggesting that windows of opportunity may already have been missed.

The Globe and Mail's Brent Jang has been closely following some of the recent ruminations of Petronas and its Canadian beach head Pacific NorthWest LNG. With the Malaysian energy company observing over the last few weeks,  that for their Lelu Island proposal to find a successful Final Investment Decision sometime into the future, some cost reduction moves and personnel issues will need to be addressed.

Petronas wants engineering work for B. C. LNG venture to be shifted offshore
Petronas to hire hundreds of skilled foreign workers for B. C. LNG project

And while there has always been some expectation that skilled foreign workers would be required for the wide range of projects that have popped up on the LNG horizon.

The prospect of hundreds of workers and the contracting of key engineering projects related to the Pacific NorthWest LNG project going offshore, might put a bit of a dent into the BC Liberal's projections of great job advances for the province.

Beyond that, we imagine that there are a few members of Prince Rupert City Council that might be coaxed into a comment or two, regarding such a shift in the employment prospects for a major project in the region.

Another project for the North Coast that might be taking an interesting twist, are the prospects ahead for a development from the Australian Energy company Woodside, which has been making a bit of forward momentum on their plans for an LNG terminal at Grassy Point near Lax Kw'alaams.

How that might affect their plans for Grassy Point has yet to be outlined, for it's part Woodside was in Lax Kw'alaams on Wednesday hosting an Open House regarding it's proposed development near the community.

Whether the shift in interest in Kitimat may make for yet one more potential Prince Rupert project on a back burner remains to be seen.

All of the changing dynamics when it comes to LNG, should make for fascinating watching for Prince Rupert City Council, as they continue to work their partnership with Exxon/Mobil and their proposal for an LNG Terminal for Lot 444.

The shifting arrangements of the LNG files, which seem to move at a fairly fast pace, might provide for some interesting discussions for Council as they continue to examine the benefits that could come from a development along Tuck Inlet.

A landscape, where today's front runner, sometimes fades to the back of the pack, with events far from the North Coast providing for the changing nature of the path ahead.

You can review some of that landscape from our archive of all LNG proposals for the North Coast from our LNG Archive page.
Posted by . at 9:05 AM