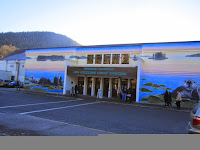 A few weeks back we noted a percolating controversy between one of the city's basketball leagues and management at the Jim Ciccone Civic Centre, with the issue of use of the bleachers in the Russell Gamble Gymnasium the main point of contention.

The situation first came to note in early October, when the dispute which focused on concerns over access to the gymnasium bleachers by the group made for a widely read item on the Prince Rupert Recreation Basketball League Facebook page and along with it, a lot of feedback from those that support the league.

With many of the league supporters taking the time to comment, offering not only their concerns over the situation, but suggestions on what measures the league might wish to take, including a suggestion to explore alternate venues such as those that could be offered by the School District.

At that point, the league organizers were hoping to arrange for a meeting with Civic officials to seek some kind of explanation of the city's policy when it comes to Civic Centre usage and how it was impacting on their situation.

Since then, it appears that league organizers did get that promised meeting with he Mayor and the City Manager to seek a resolution to their concerns and if the latest update from the League's Facebook page is an indication, things appear to have been settled to everyone's satisfaction.

Following their session with the City where a number to topics were addressed, the two sides came an apparent promise to work better on communications issues when it comes to the use of the Civic Centre.

As for the bleacher situation, the sections along the wall by the dressing rooms are now being pulled into place for the use of spectators during game action.

More on the topic and other notes related to league activities can be found on their Facebook page.

For more items on developments with the City of Prince Rupert and City Council see our archive page here.
Posted by . at 8:55 AM