City makes it official, one less public council session for 2016

As 2015 winds down, the City of Prince Rupert is putting the finishing touches on some of the plans for the year ahead.

And when it comes to the public council meetings for the next twelve months, there will be one less public session requirement on the calendar for 2016.

On Thursday, the City of Prince Rupert provided the final version of the City Council meeting schedule for the year to come,  posting  the details to the city's website.

For 2016 there will be 20 public sessions, with two meetings per month from January through June, followed by one meeting each in July, August and September.

October and November will return to the two meetings a month schedule, with December once again requiring only one public session.

The one change for next year comes through the elimination of a second meeting in September.

As we noted on the blog in November back when the prospect of the reduced scheduled was first introduced, the number of council meetings over the last number of years have slowly declined, leaving behind an era which featured two public Open meetings a month through the twelve months of a year.

As for the Council year just concluded, the statistical review is as follows:

From December 1, 2014 to December 7, 2015 City Council sat in 21 publicly scheduled Open sessions, 4 Special Regular Sessions and held 21 meetings where the public was excluded.

Our archive from those council gatherings can be found here.

The full schedule for 2016 can be reviewed below: 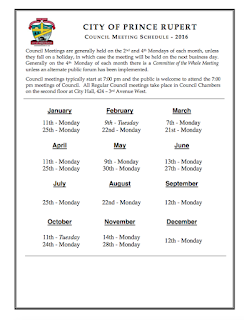