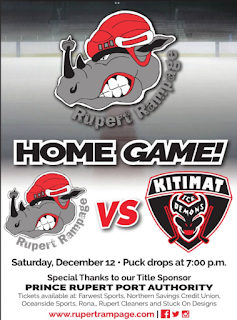 The Prince Rupert Rampage will be looking to reverse a three game losing skid this weekend as they prepare to take on the Kitimat Ice Demons at the Jim Ciccone Civic Centre on Saturday night.

The Rampage who have spent the last few weeks travelling the roads of the CIHL, dropped a tough 3-0 decision to their Northwest rivals in Terrace last weekend, two lost points that have helped Terrace secure a firm grip at the top of the Division for another week.

Following their weekend victory, the River Kings increased their lead in the West to 2 points over Smithers and 5 away from the Rampage, who currently hold down third spot in the division.

Saturday night's match up with the Ice Demons will offer Prince Rupert the chance to put some distance between themselves and the Kitimat squad with an eye towards a push back to the top as the final weeks of the CIHL Regular Season get closer.

The Rampage will be looking to their Big Four to get back on track on the score sheet, with Josh Cook, Kory Movald, Tyler Ostrom and Jared Meers proving to be the most productive on the ice so far in the 2015 season.

Puck drop for Saturday nights contest with the Ice Demons i at 7 PM at the Jim.

Sunday the team hosts its always popular Skate With the Rampage afternoon at the rink from 3 until 4:30 PM, where the members of the Rampage will take to the ice with local youth and will be available for photos, there are also rumours of an appearance from Santa as part of the festivities for the day

Your chance to participate in Sunday's Skate takes but a donation to the Salvation Army Food Bank program, you can find out more about the Sunday event here.

More updates on the Sunday skate can be found from the special Facebook page that the team has set up for the afternoon event.

You can follow the progress of the Rampage through our Results/Schedule page here, while more background on the CIHL can be found from our Rampage Archives page.
Posted by . at 9:30 AM

Email ThisBlogThis!Share to TwitterShare to FacebookShare to Pinterest
Labels: Rampage and Ice Demons Saturday at the Jim