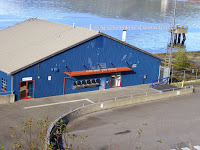 An example of how those looking to rebuild the Prince Rupert cruise industry are engaged in the long game can be found from an announcement this week from the Norwegian Cruise Lines.

The Internationally recognized Cruise Ship line is already working out the details for the 2017 season, and from that long range planning, the local efforts from Prince Rupert it seems are starting to capture some interest from the major cruise providers once again.

Prince Rupert is one of  a number of destinations listed for the Norwegian Jewel and Norwegian Sun schedules for the 2017 season, with the details of the North Coast plans noted as part of the itineraries released through a media release yesterday.

For the Norwegian Sun the 14 day Alaska tour will see visitors starts from San Francisco on May 15th, 2017 and end their Alaskan vacation in Vancouver on the 29th. A journey that will take travellers along the Alaska coast and back through British Columbia's Inside Passage, with Ketchikan, Prince Rupert and Nanaimo listed among some of the southern port calls.

The Norwegian Jewel will set sale on September 23rd, 2017 embarking on the late summer tour of Alaska, departing from Seattle on a course to Juneau, Skagway and Sitka, with Prince Rupert and Nanaimo also listed as Canadian ports of call before docking in Vancouver.

More background for customers and travel agents on those cruise options will be outlined and expanded on by the Cruise line throughout the upcoming 2016 cruise season, as they prepare to introduce their new expanded focus on the popular Alaska trips.

The arrival of the Norwegian Line would herald a bit of a shift for the local industry, which has been holding to a smaller schedule in recent years, featuring pocket cruise ships and smaller lines with smaller passenger loads.

The Northern Jewel has capacity for 2,376 guests while the Norwegian Sun has a capacity listed at 1,936, numbers which would provide for an impressive sight around the City during those 2017 Cruise Ship Days in Prince Rupert.

Last month Prince Rupert Port Authority CEO and President Don Krusel noted that while the numbers may have been small in recent years for the local cruise industry footprint, the participation level of those that have disembarked in Prince Rupert had shown some solid growth.

Through this past season visitors took advantage of a growing number of local shore excursion options available in the community, increasing that participation rate by 18 per cent.

Further development of the shore based excursion planning will continue into 2016, providing for one more season to examine what has worked and what needs work should the number of port visits grows towards the end of the decade.

With Norwegian Cruise Lines making their plans for 2017, the progress for those plans seems to be paying off for those that have continued their efforts through the last few years.

The arrival of one of the major lines in the industry will be something for the city's Cruise ship Task Force to build on and celebrate, an indication that Prince Rupert may soon be more than just a dot on a map for the large number of vessels that travel up and down the coast during the spring, summer and fall cruise season.

As for the year just ahead, no details have been released when it comes to the number of vessels making plans for port calls in 2016, those planning notes will be revealed in the New Year.

You can review the season just past from our archive page here.
Posted by . at 8:29 AM