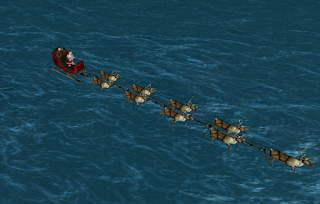 The Santa Countdown is officially on!

There are no more sleeps until Santa makes the annual journey, the reindeer, sleigh and Jolly Old Elf now airborne and travelling around the globe.

Ahead is a lengthy list of destinations that  it is estimated will take the travellers onto the North Coast sometime after the midnight hour.

And while we wait for our first reports of roof top visitors around the Northwest you can find a number of things to keep everyone occupied until bed time from a helpful website designed by the organization that keeps a watch on the skies for Santa each year at this time.

The NORAD Tracks Santa website gives youngsters a number of games to play, music to listen to and stories to read and of course for the main event, everyone can also follow the path of Santa and his team.

Checking in through the NORAD Tracking site and NORAD Twitter feed.

Another chance to keep up with the Jolly Old Elf is by way on an international radar tracking service flight tracker which is also offering updates through the day and into the night. They also have updates through their twitter feed.
called

And while at times it might look a little congested up there in the sky, Santa of course receives priority landing rights in all locations.
Posted by . at 9:47 AM