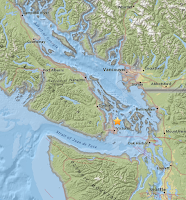 If we're all looking for a resolution or two for the New Year, last evening's 4.8 temblor that struck near the provincial capital is a timely reminder of the need to make preparations for such events on the North Coast, living as we do in an active seismic zone.

Last Night's quake which has been pretty well the news cycle for the Vancouver based media today struck at 11:39 a moderate quake that rattled residents of Victoria, Vancouver and into Washington State.

And while it was an attention getter, Tuesday' evenings temblor did not generate any tsunami danger.

The nature of last night's event was much the same as those of earlier this fall between Haida Gwaii and Vancouver Island, however owing to the large population base of southern half of the province it has become the topic of the day.

The late night shake up has however provided opportunity for the Province of British Columbia to remind residents of the need to be prepared, something you can learn more about here.

Some of the media notes on last nights seismic event can be found below.

Email ThisBlogThis!Share to TwitterShare to FacebookShare to Pinterest
Labels: Victoria area earthquake a reminder for preparedness