When it comes to the give and take of civic labour negotiations for Prince Rupert's civic workforce, there was some positive news delivered in the Spring as Contract discussions apparently came to a collegial ending with the City's negotiating team back in May.

Though unless you were an employee of the City, or a member of City Council or city management, you might not have been aware of that milestone, as no official announcement was made at the time.

Unusual for a City Administration that shows no shyness when it comes to proclaiming their achievements, yet there was no mention of the successful conclusion of negotiations during the course of the public forum of a Council session.

To go along with the under the radar theme, no update was provided by way of a media release, or even through the growing number of popular social media services that the City and some of our local politicians have been making use of lately.

As we outlined on the blog back in September, this has been a year of labour settlements across the province, with community after community haling the ability to come to terms on a new agreements, frequently outlining the details after the signatures were exchanged.

And while we don't have any public acknowledgment of an agreement such as this one that the City of Fort St. John provided to its residents to look over, we have noticed that the new collective agreement has been posted to the city's website, providing a glimpse for residents into the kind of work required to navigate such a lengthy and complicated arrangement.

From the notes provided as part of the collective agreement, it would appear that the contract which is retro-active to the start of 2015 has provided for a 2 percent increase for this year, with an increase of 2.25 percent in 2016 and another increase of 2 percent for 2017.

Those numbers would be fairly similar to the average of what other communities have negotiated through the year. The contract between the City of Prince Rupert and CUPE Local 105 was signed on May 25th and will expire on December 31, 2017.

There does not appear to be any indication as to the nature of any signing bonuses that may have been included as part of the final agreement. 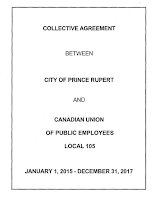 The document also provides a fair bit of background into the range of items that make for a collective agreement, providing the road map for both employer and employee as to the conditions for employment with the City of Prince Rupert.

A few selected items of interest and where to find them can be reviewed below:

The first ten pages of the document start with an overview of the various management rights, union recognition and various processes available as part of the human resources aspects of employment with the city.

The Use of Casual workers and Seniority provisions, Layoff and Bumping elements as well as the minimum staffing requirements for Public Works are outlined from pages 10 through 21

Hours of work, Job Sharing, Overtime, Vacation items, Assorted benefits to name a few of the topics can be reviewed from pages 21 to 53.

While the Job Security provisions in the new document can be found from pages 54 to 55. Those details outline how the City makes use of its work force and lays out the conditions related to civic work and that work which is contracted to outside suppliers, with a focus on the those areas that may be beyond the scope of the collective agreement

The extensive listing of job classifications and Pay schedules for them and other items of background on the hours of work required can be found from pages 59 to 65.

Background to the City's Apprenticeship Program can be reviewed from pages 68 to 72.

You can review the full Collective agreement document from the City's Career page.

For more items related to developments with the City of Prince Rupert see our archive page here.
Posted by . at 8:42 AM