Over the years, the Prince Rupert Rampage have frequently provided the proof to the ages old adage of "there's no place like home" and on Saturday night in front of another boisterous home town crowd, the local CIHL squad recaptured some of the missing scoring production of recent weeks.

The Kitimat Ice Demons were in town for the weekend showdown with their Northwest rival and while Kitimat found the score sheet first on the night, the Rampage found it often, a dozen times in fact taking the Rhinos on to a 12 to 4 decision, making for an enjoyable night for the 484 spectators at the Jim.

The volume of scoring also making for a good night for the programs of the local Salvation Army, with the Prince Rupert Port Authority ready to make good on their home game pledge when it comes to Rampage home goals, with Saturday offering up a 1,200 dollar night for the local group.

The scoring push started at the 3:31 mark of the first period with the first of five points on the night for Tyler Halliday, who had two goals and three assists through the full sixty minutes of play. That burst of scoring pushed Halliday into the top five when it comes to points this year on the Rampage roster.

Other goal scorers for the Rampage on the evening included, Josh Cook  Braydon Horcoff and Kory Movald with two markers each as well, while Devin Palmer, Jared Meers, Cole Aitchison and Craig Munro all picked up goals as the Prince Rupert offence went into hyper speed into the third period.

By the time the final whistle would sound on Saturday night eighteen members of the Rampage roster had found their way into the head office scoring report, making for a 27 point offensive outburst.

The full listings for the goal scorers and those assisting can be found here.

Considering the one side nature of the score board, the game itself was relatively penalty free, with only six penalties called in the first two periods, while frustrations did accelerate in the third with seven minors called in the final twenty minutes.

As might be expected, the bulk of the action appears to have been found in the Kitimat end of the rink with two goaltenders splitting the work on the rolling tide of Rampage offence.

Brandon Highton faced 22 shots and turned away 17 on the evening for Kitimat, while Shahar Moudahi had the bulk of the playing time in the Ice Demon nets, facing 20 shots on 45 minutes of play, surrendering 7 goals and making 13 saves.

Jordan Vanderwiel tended the twined for the Rampage on Saturday, facing 24 shots and turning aside 20 the secure the win.

The impressive victory helps to keep the Rampage ambitions towards first place alive, with Prince Rupert currently three points behind both the Smithers Steelheads and the Terrace River Kings in the competitive West division.

The loss however was a costly one for the Ice Demons, dropping them to the bottom of the Western listings and while Kitimat will be focused on reversing their skid this coming weekend in Terrace, an Ice Demon win would also provide a favour for Prince Rupert when it comes to the standings.

For their part the Rampage can take charge of their own destiny as well this weekend, with a chance to reduce the gap between second and first on Saturday night, as the division leading Steelheads arrive in town for a 7 PM showdown with the Rhinos at the Jim.

One final note from the Rampage camp this week highlights the massive success of their Sunday Skate with the Rampage afternoon, which saw a large number of North Coast residents drop by the Jim for a skate and a photo, providing not only cash donations for the Salvation Army but a large volume of canned food as part of the Annual Food drive. 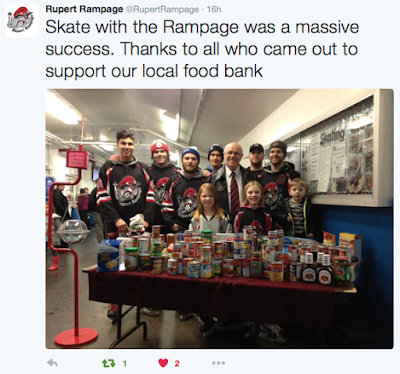 You can follow the Rampage through our results/schedule page here, while more background on events with the team and the CIHL in general can be found from our Archive page here.