On Monday, Todd Stone, the Province's Transportation Minister outlined the latest steps from the British Columbia government when it comes to personal safety issues on Highway 16, addressing a number of Highways of Tears concerns, but leaving one major initiative still not included on the province's to do list.

The funding announcement of Monday  made frequent use of the findings from a recent Highway 16 Symposium in Smithers as a guideline for some of the funding elements. (see the summary of the proceedings from that symposium here)

Though the Transportation Minister seemed to be aware that not all of the elements would be as well received as others, noting that "there is no one size fits all approach to addressing the challenges along the corridor."

The 3 million dollar program will feature five action points to enhance Safety along the Highway 16 corridor from Prince Rupert to Prince George, among the commitments.

1.6 million over 2 years for transit expansion, available on a cost shared basis with local communities.

$750,000 over 3 years for a community transportation grant program to purchase and operate vehicles.  The money for this initiative is designed to support community based transportation programs operated by First Nations, local governments or non-profit organizations.

$500,000 over 2 years for highway infrastructure safety improvements including webcams and transit shelters.  The funding will provide for an increase in the number of webcams on the highway as well as the frequency of the photographs taken from the cameras. As well, some of the funding will be dedicated towards new transit shelters in communities that will be receiving new or expanded transit service.

Collaboration to increase interconnectivity of services. As part of the program the Transportation Ministry will work to increase the level of cooperation among existing transportation services through the area, including BC Transit, Northern Health, not for profit organizations and private service providers.

In addition to the increased funding, the Province has announced the creation of a ten person Highway 16 Transportation Advisory Group that will be tasked with overseeing the implementation of the action plan and to ensure that the actions address the input received at the recent Transportation symposium held in Smithers. 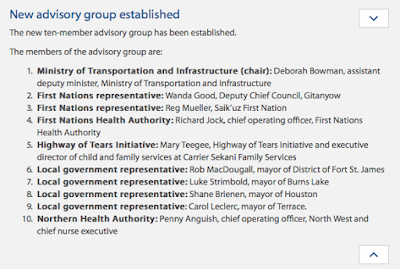 You can review the full announcement, as well as listen to a synopsis of the Governments plans from Minister Stone from the British Columbia Government website here.

And while the range of funding initiatives does cover a fair amount of territory when it comes to previously held concerns about personal safety along the Highway 16 corridor, the continued hesitation to move forward on the concept of a shuttle bus remains an issue that will continue to dog the Minister.

After a first look it seems that the province may have allocated its funding in directions that won't address the key inter community issue as best that they could, particularly the first two items on their checklist.

The 1.6 million dollars currently allocated towards transit expansion, might have been better utilized by being allocated towards the second category of the community transportation grant program, allowing First Nation communities along Highway 16 to perhaps consider the creation of their own jointly shared form of a shuttle service, making use of a some of the funding from the two points of the five point plan.

That is something that perhaps the Advisory Group  may offer up some thoughts on as they meet in January and February, as they look to put in place the measures for communities to apply the funding across the region.

The reviews to this point when it comes to the Transportation initiative have been mixed, with many positive comments related to some aspects of the program. However, the shuttle bus concept remains  a key item for many and one that still remains unresolved, despite the lengthy consultations and announcement  of increased funding delivered on Monday.

North Coast MLA Jennifer Rice who has frequently raised the issues of Highway 16 in the Legislature, offered up a short statement when it came the her thoughts on today's announcement, noting following on her Facebook page:

This is a first step, but is only a real solution if followed by other significant steps, stable sustainable funding for reliable public transport. As of today, it's still a patchwork solution but given how this government has dragged its heels for years and even deleted records on this, I'm glad to see finally some steps to a solution.-- North Coast MLA Jennifer Rice through her Facebook page on Monday.

You can review some of her past work on the file from our Legislature Archive page here.


Some of the media overview from Monday's announcement can be found below: